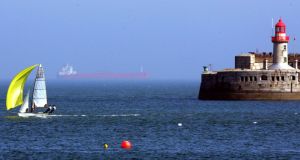 It is also hoped the arrival of large cruise ships will attract significant additional footfall in the town from residents; this is estimated at one Irish visitor per passenger. Photograph: Eric Luke/The Irish Times

A planning application for a “next generation” cruise ship berth at Dún Laoghaire harbour will be filed this month in a move expected to bring about 400,000 passengers to the town each year, a four-fold increase on scheduled visitors for 2015.

Gerry Dunne, chief executive of the Dún Laoghaire Harbour Company, said the plan would complement a similar application from Dublin Port but that the future could be one of collaboration under a “Cruise Dublin” banner.

The plans will be submitted under strategic infrastructure legislation which will see them go straight to An Bord Pleanála.

A stakeholder group in Dún Laoghaire including the harbour company, Dún Laoghaire Rathdown County Council and the local Business Improvement District (Bid) believe the adoption of the “Copenhagen model” for cruise ships will accommodate about 800,000 passengers in the capital each year with about half landing in the south Dublin port.

In Dún Laoghaire alone, that is estimated to represent a €27 million boost to the economy as well as creating employment.

A “next generation” berth is required in the Dublin area to facilitate ships of up to 340 metres. Currently, Cobh in Cork is the only location on the east coast that can do so.

The first cruise call to Dun Laoghaire in 2012 brought with it 300 passengers and crew. That number will rise to 100,000 this year and represents a major lynchpin in the economic hopes of the area.

Speaking at the “Future of Towns in Ireland Summit 2015” in Dún Laoghaire today, Mr Dunne said one of the complimentary initiatives to retain passengers in the town would be an afternoon “showcase” of Irish talent for each ship’s arrival.

He said about 50 per cent of those who visit cities on such cruises often decide on their own agendas, as opposed to those on offer by the cruise company itself.

“What are we famous for? We are famous for a bit of music, a bit of fun, a bit of craic, good company. We just want to give these people a taste of what it is we Irish are good at,” he said.

It is also hoped the arrival of large cruise ships will attract significant additional footfall in the town from residents; this is estimated at one Irish visitor per passenger.

Mr Dunne did not detail the plans for the berth at today’s conference but he stressed to delegates the importance of the harbour in the future life of the area and its development.

In drawing up its master plan for the harbour three years ago, Mr Dunne said the company had studied numerous other examples including Barcelona, the UK, Genoa and Edinburgh. These showed the importance of a mixture of residential development, retail and cultural attractions.

He also outlined efforts between the local yacht clubs in Dún Laoghaire which are working together to attract international sailing events, the first of which, although unspecified, is expected within the year.

Tim Radley of VM Unleashed which specialises in retail strategy, said the future of the town was not necessarily defined by the volume of shops, but the quality and what they offer as a package to the community.

“Dún Laoghaire’s got a way to go before it gets to creating [a] complete community,” he said.

“But…there is new life and a new level of excellence in what we see in terms of store fronts.

“They call come together now to actually create something which is a much higher level and is working very, very well.”