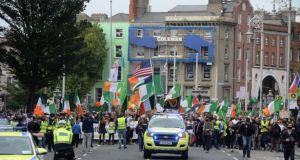 The Government is to discuss the right to protest following an anti-mask demonstration that took place in Dublin at the weekend, Simon Coveney has said.

The Minister for Foreign Affairs said it was important to strike the right balance between the rights of individuals and law and order.

“There’s always a balance that the State has to manage between giving people the right to protest and be heard and to demonstrate and at the same time ensure that law and order is respected,” he told Newstalk’s Pat Kenny show.

Thousands of people took part in a protest in Dublin against the wearing of masks on Saturday.

“If there had been a tough clampdown of this protest by the guards you’d have people ringing in this morning to you saying that we have a police state and that people aren’t allowed have their say, and what about the right to protest,” Mr Coveney said.

“This is a difficult balancing act, I have to say that the people who were involved in that protest do not represent a majority review, in fact they represent a very, very small minority view.

“It is very unwelcome that people are foolhardy enough to think that they can ignore all of the public health advice, all of the doctors that are repeating the message over and over again, of our national public health team at Nphet, and the Minister for Health and the Government messages, they’re ignoring all of that because they see conspiracies in everything, and they just demand the freedom to walk around without restrictions — that is a tiny minority view.”

Mr Coveney said that week after week, there needed to be strong messaging that was persuasive so that the vast majority of Irish people continue working with the Government.

The Minister acknowledged that there may well be restrictions required (in Dublin) in terms of people moving between households that may be more restrictive than in other parts of the country.

“I am not happy, most of the people who saw that demonstration on television would have been angered by it, that’s why I’m saying that the Government needs to try to get the balance right between the right to protest and be heard and the law and the regulations and guidelines that we have to protect the public. We’ll be discussing that balance in Government today. The Covid meeting today after which hopefully we’ll be able to sign off on a plan that we’ll bring to Government for full decision tomorrow.”

Mr Coveney agreed that the protest had been an affront, “I think decent people who think about Covid and listen to the public health advice, would have watched those images and been infuriated by it, we live in a democracy and people that have different views need to be able to express them, and we need to be able to get the balance right between allowing that and also protecting broader public health.

“We need to discuss whether we got that right yesterday or not. I have a lot of sympathy for the guards on this issue because managing public protests and getting that balance right is not easy.”