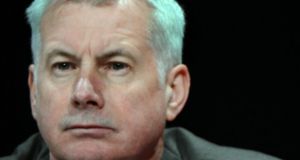 Seán Crowe TD: said the work of the Lariam inquiry group was positive news for those who had been affected. .Photograph: Brenda Fitzsimons/The Irish Times

Minister for Defence Simon Coveney said he would be happy to meet serving or former soldiers who believed they were affected by taking the anti-malarial drug Lariam.

“My only objective is to try to do the right thing to protect the health of our Defence Forces personnel while they are abroad in areas that are affected by malaria,” he said. “It is a serious risk, as malaria is a killer and we need to protect our troops from it.” Mr Coveney said how to do that, and what drug to use, were questions of judgment and medical assessment.

An expert group had been reconvened to examine policy on Lariam, adding that what was being done internationally was under consideration. He expected to receive the report by the end of January. “I have no tie to Lariam,” he added.

The Minister was replying to Sinn Féin TD Seán Crowe who said a vigil had been held in Dublin’s Merrion Square this month in support of serving and former soldiers claiming to be affected by the drug.

“It was a moving ceremony and I heard disturbing stories from those present. I heard from former members who were still struggling with the negative effects they believed had ruined their lives and from the parents of former soldiers, who blamed Lariam for the suicides of their loved ones.’’

Mr Crowe said the work of the inquiry group was positive news for those who had been affected. There were ongoing inquiries in the UK and other jurisdictions. Mr Coveney added that it was not an inquiry but a working group of experts who would make recommendations to him on the continuing use, or otherwise, of the drug.

None of the drugs available to protect soldiers from malaria was without issues and problems, he added.