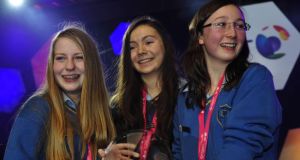 Three Cork teenagers who won the BT Young Scientists of the Year competition have been named by Time magazine as among most influential teenagers in the world.

They recently won the global science research competition at the Google Science Fair 2014 in San Francisco.

They are joined on the Time list with President Barack Obama’s daughters Sasha and Malia; the Nobel Peace Prize winner Malala Yousafzai and the New Zealand singer-songwriter Lorde.

The citation from Time praises the teenagers for their research on the effects of the bacteria diazotroph, an organism that sucks nitrogen from the atmosphere into the soil, which speeds up the germination of cereal crops.

“This advance could play a crucial role in solving the global food crisis, and Judge, Hickey and Healy-Thow are already planning to commercialise it,” the magazine says.

Their research showed that if diazotroph is present, it accelerates the germination process of high-value crops such as barley and oats, potentially boosting output by up to 50 per cent.

Using naturally occurring rhizobium strains of the diazotroph bacteria family, they carried out an extensive study of their impact on the germination rate and subsequent growth of the cereal crops wheat, oats and barley.

Detailed statistical analysis of their results indicated that these bacterial strains accelerated crop germination by up to 50 per cent and increased barley yields by 74 per cent.

They teenagers tested more than 13,000 seeds taking up a spare room, a kitchen, a sitting room, a conservatory and a garden.