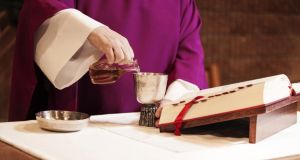 A Cork priest has announced he is going to vote Yes in the marriage referendum. File photograph: Getty Images/iStockphoto

A Cork priest has announced that he plans to vote Yes in Friday’s marriage referendum, as he believes gay people are entitled to the same rights as everyone else.

Fr Tim Hazelwood, the Catholic parish priest in Killeagh, Co Cork, said that he had thought at length about the matter before concluding that he should vote Yes in the referendum.

“I feel that as a country and a church we haven’t treated gay people well and I said that at the end of mass on Sunday when I said I would be voting Yes,” he said.

A qualified psychotherapist, Fr Hazelwood said he had worked with gay people as they struggled to come to terms with their sexuality in difficult situations.

“I would have come across a good few people in that situation, who would be gay and . . . the hurt of just living in Ireland and of listening to attitudes that are very hurtful to them.

“I have listened to the debate and I believe that the issues raised by the No campaign around surrogacy and children are separate issues that can be addressed in other ways.

“But living in today’s world and looking to the future, I just cannot see how as a society we can justify not granting gay and lesbian people the right to marry,” he said.

Fr Hazelwood, who ministers in the diocese of Cloyne, said that he believed that the issue of same-sex marriage was essentially a matter for the State and not the church to legislate on.

“To my mind it’s a State issue - the church has its own teaching and we can’t expect everyone to fit into our way of looking at things,” he told The Irish Times.

Fr Hazelwood said that he had received a mixed reaction from parishioners when he made his comments at the end of mass on Sunday, but he respected people’s views.

“Some people came and congratulated me, but others would be more orthodox in their views and they felt, firstly, I shouldn’t have done it and secondly, they didn’t agree with me.

“They wouldn’t have been happy with what I said and I understand their views but I just feel strongly about it and I believe all people in Ireland should be treated equally.”