Exhibition put together by Armenian community in Ireland 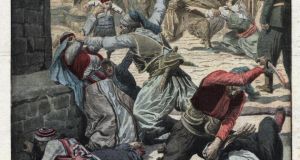 It was described by US President Theodore Roosevelt as “the greatest crime of the war” and now the Armenian genocide which began in 1915 has been commemorated with a special exhibition of photographs at Cork City Library.

“The Iconic Images of the Armenian Genocide” – officially opened by Lord Mayor of Cork, Cllr Chris O’Leary – features a series of old photographs which depict the genocide of 1.5 million Armenians living in what is now present day Turkey.

One of the organisers, Jimmy Lynch explained that the exhibition has been put together by the Armenian community in Ireland to mark the centenary of the genocide and it is based on an original project by the Armenian National Institute and Armenian organisations in the US.

“In Ireland we rightly remember what happened in World War I in places such as Gallipoli and Suvla Bay where many Irish suffered and died but we should also be aware of what happened in Armenia – this is an important and emotional year for the Armenian community in Ireland and worldwide.

“They will be remembering and commemorating what happened to their family antecedents in those dark times from 1915 to 1918 and the people of Cork can share in that remembrance by visiting and viewing the exhibition in Cork City Library,” he said.

According to Mr Lynch, the panels of photographs depict the various aspects of the genocide, known in Armenian as Medz Yeghem, including executions, massacres, deportations and starvation of Armenians within the Ottoman Empire by the Young Turk movement.

“Together these photographs recreate a sense of the terror exercised by the Young Turk regime and reveal the extent of the dispossession and decimation of the Armenian people in their historic homeland,” said Mr Lynch.

“With panels displaying photographs of survivors, rescued women, homeless children and refugees, the scale and depth of the uprooting of the Armenian people is revealed,” said Mr Lynch.

Many of the images were taken in the teeth of a strictly enforced ban on photography by the Ottoman authorities and the collection represents photographs that survived and were scattered across several continents before being brought together, he added.