Key issues: Heathrow slots and connectivity as well as jobs and investment in carrier 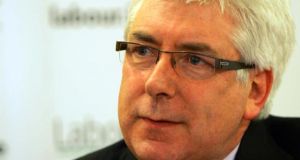 Alex White: Connectivity would be a key issue, as well as the availability of cash for investment in the airline. Photograph: The Irish Times

IAG is preparing detailed responses to a range of concerns put to it by the review group examining its proposed takeover of Aer Lingus on behalf of the Government.

The questions it will answer surround the key issues of the Heathrow slots and airline connectivity from Ireland, as well as IAG’s plans for jobs and investment in Aer Lingus.

The committee, comprising senior civil servants from the departments of Transport, Finance and Public Expenditure, investment banks and legal advisers, is now seen as the key player as IAG seeks to win Government support for the deal.

A crucial issue for the committee is whether the Government can be given some firm and enforceable commitment on the future of the Heathrow slots.

Having faced significant political opposition to its proposed takeover, IAG, led by Willie Walsh, is expected to try to regain ground in the takeover battle next week. It will be the bidder’s first major response as up to now it has kept a low profile, partly due to strict stock exchange takeover rules.

IAG indicated at a meeting with the committee last week that it would respond to the issues raised, Government sources said, and is this weekend believed to be putting together full responses to be outlined to the committee.

Currently, the Government’s 25 per cent stake is not enough to block a sale of the slots unless it gets the support of other shareholders.

Central to the talks between IAG and Aer Lingus will be whether the British airline group can put forward a mechanism which gives the Government an effective veto over any sale of slots in the long-term, as well as reassurances that they will continue to be used for air traffic from Dublin, Cork and Shannon.

IAG is also likely to outline plans to route traffic from its network on to transatlantic flights from Dublin and Shannon. This would make the bid more attractive as it would help boost passenger numbers.

One option would be to make the bid no longer conditional on Government support, which would leave the State in a minority position with one other dominant shareholder.

However, so far IAG has said it will only proceed if the Government and the other major shareholder, Ryanair, back the bid.