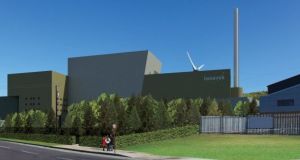 An artist’s impression of the proposed waste-to-energy facility

Campaigners against a €160 million twin incinerator project in Cork Harbour have criticised waste management company Indaver after EPA figures showed the company’s existing incinerator in Co Meath was the leading offender for emissions in 2014.

Cork Harbour Alliance for a Safe Environment (Chase) said the latest the EPA emissions report showed that Indaver’s incinerator at Duleek in Co Meath had the highest emissions of any EPA licensed facility in 2014 with some 19 breaches of emission limits.

According to Chase, the EPA Licensed Sites - 2014 Report on Air Emissions found that Indaver’s Duleek operation was top of the list of 33 sites which in total were responsible for some 113 Emission Limit Value (ELV) breaches in 2014.

Indaver’s 19 ELV breaches all related to carbon monoxide emissions limits and were due in one case to power failure, one case process shutdown with the other 17 classified as being due to other causes.

According to Chase chairperson Mary O’Leary, the EPA report states “A review of this licence has addressed the issue”, which in effect means the emissions limit band has been widened.

“Increased carbon monoxide levels mean inefficient burning, which means a higher risk of other pollutants such as dioxins and furans which form at lower temperatures,” said Ms O’Leary.

“Even if the breaches themselves are not considered environmentally significant, it’s unacceptable that the EPA’s response to these breaches is to allow Indaver to continue this inefficient operation by widening their licence, rather than imposing any penalty.”

Indaver Ireland managing director, John Ahern rejected Chase’s criticisms and said that the 19 ELVs recorded at the Duleek operation amounted to just a fraction of its emissions from the plant during 2014.

“Every year more than 100,000 individual measurements across a range of parameters are made at the Indaver facility in Meath and shared with the EPA. To date, we are 99.9 per cent compliant with our EPA licence threshold limits,” he said.

Mr Ahern pointed out that the EPA report states the breaches “are in relation to CO (carbon monoxide) and are not considered environmentally significant”. He said dioxin levels at the Duleek plant are more than ten times below the threshold value in our licence.

Indaver Ireland was refused planning permission by An Bord Pleanála in 2011 for its proposed facility at a 12-hectare site at Ringaskiddy on four separate grounds, including that it failed to address concerns over coastal erosion at the site and the risk of road flooding.

But on December 23rd last, An Bord Pleanála ruled on an application by Indaver and determined the proposed incinerator would comprise a strategic infrastructure development under the terms of the Act, paving the way for the company to submit a new planning application.