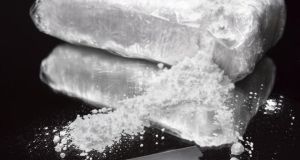 Drugs worth an estimated €1 million have been seized at Dublin port.

Fifteen kilograms of cocaine was discovered in a haulage vehicle that had just arrived from the UK.

The drugs were intercepted on Saturday as a result of a joint, intelligence-led operation between the Revenue Commissioners and the Garda drugs and organised crime bureau.

A 36-year-old man was arrested and has been charged with drug trafficking offences.

He remains in custody and is due to appear in court in Dublin on Monday.