Citizens’ Assembly given framework to deal with ethical questions 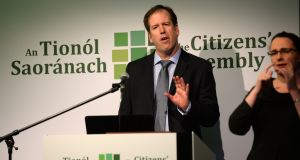 Ethical questions about policy, regulation or law involve a different set of considerations to those about individual acts, an expert in medical ethics has told the Citizens’ Assembly.

The assembly, comprising chairwoman and sitting Supreme Court judge Ms Justice Mary Laffoy and 99 citizens, was established by the Government to consider what it considers some of the most important issues facing the State’s future.

Its first task is to deliberate on the constitutional ban on abortion.

Ms Justice Laffoy told the members the purpose of the session was not to consider the ethical arguments on either side of the abortion debate, but to provide them with a framework for thinking about ethical questions.

Dr Sheehan said he was not going to talk about answers and was not particularly interested in the answer to what was right or wrong, but wanted to explore how people arrive at their views.

“Quite often we judge people. We make an assessment and we judge them in particular kinds of ways,” he said.

When thinking about ethics, we were essentially engaged in an activity which involved “reason giving”, Dr Sheehan said.

In a question and answer session, members of the assembly asked questions such as what part “gut feelings” played in ethics and whether these should be considered or left aside.

Dr Sheehan said that gut feelings were something “to be explained”. When we went through the process of giving reasons and articulating them, part of that was to capture the reason for the gut response we had.

Members also asked whether it was possible to reconcile personal ethics with ethics more generally in society.

“To what extent can the individual be reconciled with the societal? I don’t think they always can be – I think that is the nature of things,” Dr Sheehan said.

This was not supposed to be a “futile, depressing thought”.

He did not think we could solve these problems, because they were the problems of “being human”.

On Saturday, the assembly heard the Eighth Amendment to the Constitution, which gives effect to the general ban on abortion, was not “satisfactory or helpful” for women who experience unplanned or crisis pregnancies.

The comments were made by Irish College of General Practitioners council member Dr Brendan O’Shea in his presentation on clinical practice in Ireland.

Dr O’Shea said the provisions of the Protection of Life During Pregnancy Act 2013 were either ignored or are found to be “cumbersome, stressful and difficult” by GPs, pregnant women and their partners.

He said women from poorer backgrounds who may be inclined to seek abortions abroad were often prevented from doing so due to the prohibitive costs involved.

This added to “the sense of suffering” for many women, Dr O’Shea said. He said inequality was “writ large across most aspects of our health service, and this area of care is no exception”.

Janice Donlan of the State-supported Crisis Pregnancy Programme told members on Saturday that 3,451 women travelled from Ireland to the UK for abortions in 2015, down from 6,673 in 2001, but indicated that more women now appear to be seeking information on mail-order abortion pills.

Ms Justice Laffoy said the Eighth Amendment was a “complex and contentious” topic of discussion that would require a “reasoned, sensible and compassionate approach”.

Members will hear submissions from legal and clinical experts as well as advocacy groups over four weekends between November and early March.

They are then expected to vote on at least one motion relating to the amendment during the last weekend session devoted to that topic in March, the results of which will then be reflected in a report submitted to the Oireachtas for its consideration next year.

The assembly has already received 600 public submissions relating to abortion and the closing date for such submissions is December 16th.