Cavan in shock after five die in suspected murder-suicide 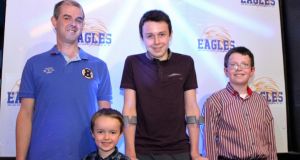 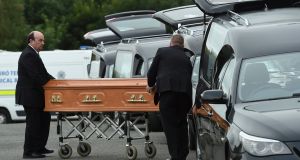 Coffins are taken to hearses at the scene in Oakdene, Barconey, Ballyjamesduff in Co Cavan, where a family of five were found dead in their countryside home. Photograph: Philip Fitzpatrick/PA Wire

Outside Barconey Heights, a picturesque four-house estate overlooking rolling Cavan hills across a narrow country road, Garda forensic team members were walking in and out of the home with bags.

The estate was sealed off at its entrance, the Garda tape the only sign anything had been disturbed in this quiet rural corner, halfway between Oldcastle and Ballyjamesduff.

Earlier yesterday morning gardaí had been called to the house where the bodies of Alan and Clodagh Hawe and their children Niall (11), Ryan (6) and Liam (13) were found in what is being treated as a murder-suicide.

Assistant Garda Commissioner John O’Driscoll described the scene as “a grim discovery”. The alarm was raised at about 10.45am when someone, believed to be a relative, called to the house and became suspicious

“We can confirm that we are not looking for anybody else. We believe all the answers are within that house so therefore the most likely scenario that one person in that house may have caused the death of others,” he said.

The assistant commissioner said there was no evidence that a firearm was used in the incident and a number of objects found in the house would be examined. It is believed the couple was found downstairs and the boys were found upstairs in bedrooms.

“They were wonderful children who will be greatly missed by all who knew them,” Castlerahan National School principal Anne Foley said yesterday. “Alan was a valued member of our school staff and community,” she said. Oristown principal Ann O’Kelly Lynch said Clodagh “was a much loved and valued teacher in our school and will be greatly missed by all who knew her”.

The Caffreys had become friendly with them and described them as being very much part of the community. Liam had sung in the choir, Alan had read at Mass.

“They kept very much to themselves,” said Mrs Caffrey. “Someone [once] said you never heard a word from the house.”

Their daughter had been in school with Liam and had been taught by Alan.

“He never got cross with them,” Mrs Caffrey said of him as a teacher. “Nearly like an old schoolmaster type.”

“They were great neighbours. It was the last thing I would have expected,” he said.

Another neighbour said he did not know the family but the tragedy had impacted on the quiet area.

“It was very shocking. We just can’t believe that would happen around here. We heard it on the news and it was next door,” he said.

Married for 15-years, both Mr Hawe, originally from Kilkenny, and Mrs Hawe, from the Cavan area, were well-known in the community.

Mr Hawe was treasurer of the local Castlerahan GAA club, which said the family was “well-known and widely respected” in the club and community and the news was a “dreadful shock”.

According to locals the family was seen in the close-knit community on Sunday “in high spirits”and Mr Hawe was out collecting for the club.

“As the news spread of it, for some time I just blocked it out of my mind that it couldn’t have happened. A family that were seemingly happy yesterday; and now five of them are dead; it just beggars belief.

“I was talking to a few of the local people here in the community and they are just rejecting the news because they are in such shock. They are totally numb and can’t get their heads around this particular event,” he said.