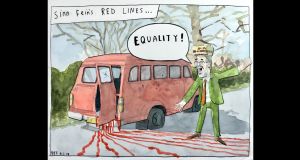 A Northern Ireland cartoonist has defended using a gory image of the Kingsmill massacre to satirise Sinn Féin’s response to the Barry McElduff controversy.

The cartoon by Brian John Spencer referred to Sinn Féin’s so called “red lines” - its demands for movement on issues such as an Irish language act, same sex marriage and a bill of rights for Northern Ireland.

The image, which he published on Twitter, also referred to Sinn Féin’s encapsulation of its demands by calling for “respect, equality and integrity” from unionism before it would agree to share power again with the DUP.

The illustration alludes to “Sinn Féin’s red lines”, depicting a man who Mr Spencer said was Gerry Adams with a loaf of bread on his head saying from a speech bubble, “Equality!”. Next to him is an image of the van in which the ten Protestant textile workers were travelling on the day they were murdered with red lines of blood streaming from the vehicle.

The satiric image was published following Sinn Féin’s disciplining of West Tyrone MP Barry McElduff for posing with a picture of a loaf of Kingsmill bread on the day of the 42nd anniversary of the 1976 Kingsmill Massacre.

They later removed these tweets when they were informed by some of the Kingsmill families that they were upset by the image. Some relatives said they did not take offence.

Alliance leader Naomi Long said Mr Stalford and Mr Beattie in retweeting the image were engaging in “irresponsible, inflammatory and insulting behaviour which is unbecoming of their role”.

“Artists, of course, have a right to freedom of expression, and will often use images which are provocative or even grotesque in order to make their point. However, we are not artists, comedians, or satirists. We are supposed to be politicians,” she said.

“Some of our elected representatives appear to be engaged in a race to the bottom, in which we will all be losers. It needs to end now,” she said.

Mr Stalford and Mr Beattie defended the retweet and said they took the image down in deference to requests from people connected to some of the Kingsmill families.

Mr Beattie described Ms Long as the “Mother Theresa of twitter” and said Mr Spencer’s cartoon and message was “absolutely valid” in that it highlighted the “hypocrisy of Sinn Féin” in relation to the “respect agenda”.

Mr Spencer defended his cartoon and said his sympathy was with the Kingsmill families. “The job of an artist is to look at what’s happening and point out the hypocrisy and the bluffery,” he told the BBC.

He said he was partly prompted to draw the cartoon in response to the “lecturing fatigue” within the unionist community brought on by Sinn Féin’s stance on equality issues and the “damage and hurt of seeing perpetrators crying victim”.

“The material with the van and the blood could be seen as obscene, but the past was gory and brutal and tough images have to be seen to reject the past and move forward together,” added Mr Spencer.

A Sinn Féin spokesman said the tweeting of the cartoon was a “crass, insensitive and disrespectful and party political commentary on the issue of dealing with the past”.

“This was an intentional attempt to inflame tensions and use the past for party political point scoring,” he added.

“There is a need to be sensitive and respectful when dealing with the issue of victims. Where disrespect is shown to victims then parties have to show leadership and act,” said the spokesman.

Mr McElduff, an abstentionist MP, was suspended for three months by Sinn Féin for posting the Kingsmill tweet.

The South Armagh Republican Action Force said it carried out the Kingsmill Massacre but this was dismissed at the time, and subsequently by a 2011 Historical Enquiries Team investigation, which said that the Provisional IRA was responsible for the “purely sectarian” and “calculated slaughter”.