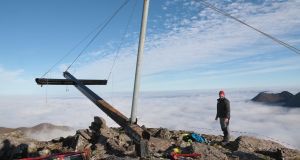 The cross on the summit of Carrauntoohil - cut down over a week ago - was replaced by a group of volunteers early on Saturday morning. Photograph: Valerie O’Sullivan

A steel cross chopped down from the summit of Ireland’s highest mountain, Carrauntoohil, in Co Kerry, has been re-erected.

A group of climbers left to carry out the work before dawn on Saturday, one week after the cross had been cut down.

The party made their way under cover of darkness and without any advance notice to media to avoid any possible protests, according to a spokesperson.

The group of 30 people - mountaineers, landowners and others - made their way before dawn to the summit, carrying with them welding gear, hoists and other equipment to reinstate the 5m-high cross.

It follows a decision earlier this week by the Macgillycuddy’s Reeks forum to reinstate the cross before Christmas.

The structure was made by Liebherr Ireland in 1976 for the local community.

It had replaced an earlier wooden structure which was erected in the 1950s.

The forum, with members including landowners, community and business representatives, guides and representatives of the county council and the National Parks and Wildlife Service, met in Killorglin, and was unanimous in its decision to re-erect the cross.

Groups such as Atheist Ireland had voiced concerns about the appropriateness of the Christian symbol standing on the mountain. They had not condoned the cutting down of the cross.

There have been calls for security on the mountain, including the erecting of CCTV cameras at the principal car parks, and patrols by mountain rangers.

About 1,500 people a week climb the Reeks, the majority of them tackling Carrauntoohil.

Gardaí who were helicoptered to the scene last weekend to carry out a technical examination of the damaged monument are treating the case as criminal damage and have launched an investigation.