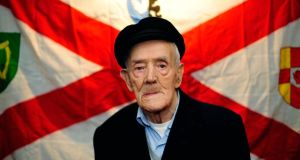 Able Seaman Des Branigan who served on the Irish Poplar, one of the Irish Shipping vessels, in front of the company flag at a reunion to mark the 30th anniversary of the closure of the company. Photograph: Aidan Crawley

Three decades after the controversial liquidation of Irish Shipping Ltd, former officers, crew and staff paid tribute to the role of the State company at a special reunion in Dublin. Up to 80 people gathered in Earlsfort Terrace’s Conrad Hotel last Friday night, close to where the first meeting was held to set up the national shipping line in 1941.

One of its first recruits, Des Branigan (96), recalled that those early crews put their lives at risk to ensure Irish people did not starve during the second World War. Britain had decided it could no longer expose its deep-sea ships to transporting goods to and from a neutral state.

Branigan served on the new State fleet’s first vessel, bought from a Greek owner for £142,000 in 1941 and renamed the Irish Poplar. He recalls meeting then taoiseach Éamon de Valera and minister for supplies Seán Lemass when the Irish Elm arrived into Alexandra Basin in Dublin Port after a three-week voyage with grain from Nova Scotia.

On November 16th, 1942, 33 of his colleagues died when the Irish Pine was torpedoed and sunk by a submarine in the north Atlantic. The following year, the Irish Oak also sank, this time fortunately with no casualties.

The company’s flag, black and white photos of ships and crew and copies of the old Signal magazine, were among items on display on Friday night, when colleagues who had not seen each other in years compared memories.

John and Ann Reilly, from Meath and Cork respectively, took their two children, Yvonne and Ian, to sea as part of the company’s arrangement which allowed up to four spouses and children at a time to travel on deep-sea trips. “I was the only woman on board a lot of the time and I home-schooled – or ship- schooled – the kids,” Ms Reilly said. “They loved it as they had 40 dads at any one time and I think my daughter can still count to 100 in Japanese.”

Capt Alan Coghlan, a former Shannon-Foynes harbourmaster, joined in 1966. He recounted all six ships he served on, while Gerry McGovern, the company’s senior catering officer, was with his wife Lily, who went to sea also.

Jack Rogan, who spent 35 years with the company, was on the Irish Spruce in the French port of Marseille when the liquidation was announced by the late Fine Gael transport minister Jim Mitchell.

The company had incurred net losses of £14 million in 1983 when the global deep-sea freight market collapsed. The Irish Spruce was arrested by the port authorities and the propellor removed so it could not leave – even though it was being leased and was not part of the assets.

Some 490 people lost jobs and pensions in the liquidation, jointly agreed by Mitchell and then finance minister Alan Dukes.

“We didn’t get a penny of redundancy until 1994,” Rogan says. He estimates the whole debacle cost the State about £144 million. “Berthing fees cost £1,150 for each day the Irish Spruce was in Marseilles over two years, and it was sold for $3.25 million and then sold on again for £22 million sterling about 14 months later. Even the late taoiseach Garret FitzGerald admitted the way it was all handled by the State was all a big mistake,” he adds.