Candlelit vigil to be held in Cork for Paris attack victims 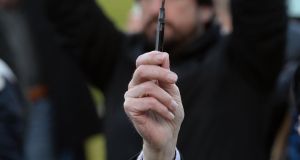 A pen is held up at an NUJ-organised public gathering at Dubh Linn garden, Dublin Castle on Saturday; people gathered in remembrance and solidarity with the people of France following the shootings in Paris last Wednesday. Photograph: Dara Mac Dónaill/The Irish Times

A group of French citizens living in Cork are organising a candle lit vigil to mark the recent killings in Paris, including the murder of journalists and cartoonists at the offices of Charlie Hebdo on Wednesday.

The ceremony takes place at Daunt Square in Cork city centre at noon on Sunday and everyone is invited to attend to express solidarity with those killed in the shootings.

One of the organisers, Clement Vignault, went to school with a brother of one of the victims. He said they hoped to see not just French people at the vigil, but also Irish people and others living in Cork.

“Our purpose is to show our support for press freedom and to express our condolences and solidarity with the families and those close to the victims of these shootings,” he said.

People are asked to bring placards with the slogan “Je Suis Charlie” which has become the international sign of solidarity with those killed in Charlie Hebdo killings.

For further information, you can visit the Facebook event page.