Calls for development of North Quays in Waterford 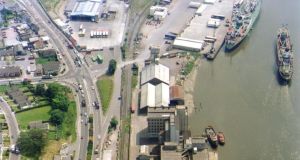 Waterford North Quays, photographed in 2002, “should be a focus for major development”

The disused North Quays in Waterford should be the focus for “major development” and have the potential to be a “landmark reflecting the new confidence in the southeast”, Irish Times editor Kevin O’Sullivan has said.

Speaking at a breakfast briefing hosted by the Waterford Chamber of Commerce yesterday, Mr O’Sullivan said the North Quays project should be “recast and accelerated” and suggested using an international architectural competition, facilitated by the better economic climate and “appropriate tax incentives”.

He also said that, at a time when the combined newspaper and digital readership of The Irish Times “has never been larger or more diverse”, the company is launching a paid-for “digital pass” next year as it expands its digital content.

In relation to the future of Waterford, Mr O’Sullivan said the redevelopment of the North Quays would be “a big message in renewing the city beyond the Viking Triangle” which has been the focus of major and acclaimed improvement in recent years.

Mr O’Sullivan, who is from Tramore, Co Waterford, recalled that “a young John Hume” had addressed the Waterford chamber.

“He made an overwhelming case for change across all sections of Irish society – north and south; a call for a new politics, a new respect of traditions, a new engagement that was to bring peace and a tremendous economic dividend.”

This call had a particular resonance in Waterford which has so much history making up its rich lineage, he said, and reflecting its diversity.

“In a way, we are in a similar period now, even if the blend of transformational thinking and action we need is somewhat different.

We have to be brave enough to embrace major, unrelenting change to return Ireland to a better, more sustainable place, after what for most has been seven years of horrible recession.”

Mr O’Sullivan’s speech was on the theme of “change lessons from upheaval in the media sector”.