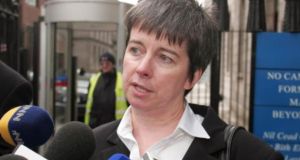 Child sex abuse survivor Louise O’Keefe was I said it was a positive meeting with Enda Kenny overall, as he pledged tghatCabinet would make a decision before Christmas on whether the state is going to continue to fight claims by people abused while attending primary school.

Child sex abuse survivor, Louise O’Keeffe has welcomed a pledge from Taoiseach, Enda Kenny that the Cabinet will make a decision before Christmas on whether the state is going to continue to fight claims by people abused while attending primary school.

Ms O’Keeffe had an hour long meeting with Mr Kenny and Minister for Education, Jan O’Sullivan and Minister for Children, James Reilly at which she raised the issue of some 44 people who had brought claims against the state after being abused in primary schools.

The 44 survivors were among 135 former people who had brought actions for damages against the state over abuse in schools and whose claims were awaiting the outcome of Ms O’Keeffe’s own claim for damages after she was abused in Dunderrow National School in Cork in the 1970s.

After Ms O’Keeffe lost an action for damages when the High Court ruled that the state was not liable for the abuse, the Dept of Education wrote to others with claims pending advising them of the outcome of Ms O’Keeffe’s case and warning that they would be liable for costs if they too lost.

Ms O’Keeffe lost a Supreme Court appeal in December 2008, the Dept of Education wrote to the 135 people with claims outstanding advising them they would pursue them for costs if they did not drop their claims by the end of March 2004 and all but 44 dropped their claims.

However when Ms O’Keeffe won her case when the European Court of Human Rights ruled last January that Ireland had failed to protect her from sexual abuse while in primary school, the government promised to review the situation in light of the European judgement.

“Enda Kenny said they are taking legal advice on the cases - he said that they have four Cabinet meetings left before Christmas but he promised me that it would come before Cabinet at one of those meetings and that a decision would be made in relation to these sex abuse survivors.

“He gave no indication as to what that decision will be but I am encouraged by the fact that he and Jan O’Sullivan gave a clear commitment to have a decision before Christmas for those 44 still awaiting a resolution of their claims.”

Ms O’Keeffe said that she also raised the issue of appointing a designating child protection officer in each province to look after the interests of children with the designated person having the power to visit and inspect schools.

“Enda Kenny told me that there were already looking at having designated child protection people in schools but I said that wasn’t satisfactory as the designated protection person in many schools is the principal and that clearly isn’t appropriate given that in some cases, principals have been abusers.

“I said to them that I wanted the child protection officer to be independent of the school, the Dept of Education and the HSE who are the agency charged with investigating any complaint- the person’s sole function should be to listen to the child and the child must have confidence in the person.”

Ms O’Keeffe said that she also urged Mr Kenny and his cabinet colleagues to put the current child protection guidelines on a statutory footing where they are mandatory as many schools have diluted them down when they are not legally obliged to implement them.

“It was a positive meeting over all, they did listen and Minister James Reilly asked me would I like to attend the committee stage hearing of the Children’s Bill and he said he would put it forward that I was interest in attending and hopefully I would get an invite to attend.” she said.