Céide Fields may be 2,500 years younger than thought 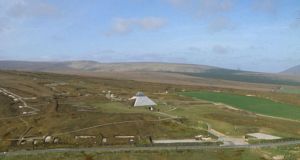 The Céide Fields, the “oldest enclosed landscape in Europe”, may actually date from the later Bronze or Iron Age, rather than from the late Stone Age.

North Mayo’s Céide Fields may be 2,500 years younger than previously thought, according to new research by an NUI Galway archaeologist.

The complex once described as the “oldest enclosed landscape in Europe” may actually date from the later Bronze or Iron Age, rather than from the late Stone Age, according to Dr Andrew Whitefield.

Dr Whitefield’s controversial study, published in the European Journal of Archaeology, disputes the date placed on the Céide fields by Prof Seamus Caulfield of University College, Dublin (UCD) who pioneered the research on some of Europe’s oldest farmers.

Former taoiseach Charles J Haughey flew in by helicopter in July 1990 to view the work by Prof Caulfield on the peat-covered stone boundaries on the north Mayo coastline, linked to the Neolithic period or late Stone Age.

“The problem with dating ancient structures such as these is that the age of the construction materials – rocks and stones – gives no indication of when the structures were built,” Dr Whitefield says of his PhD research into the field system.

“The dated organic materials recovered from the slopes of Céide hill have an uncertain relationship with the stone boundaries,” he says, and were not found within the boundary structures.

Dr Whitefield contends that the low, straight, heaps of stone are “indicative of the land having been cleared for ploughing”, and there is no evidence of boundaries for livestock management as had been previously suggested.

He says the Céide Fields are a “textbook example of the wider European tradition of ‘Celtic’ fields”, found in many parts of northwestern Europe, and ranging in date from the later Bronze Age (about 1500 BC) through to the 4th century AD.

“Placing the Céide Fields in their proper place in the archaeological chronology will shed new light on the interconnectedness of Europe,” he says, and will ensure the field system remains a “complex of great international importance”.

Associate professor Graeme Warren, who is head of UCD’s school of archaeology, said that while academics welcomed debate, Dr Whitefield had omitted several key pieces of research and had misunderstood the Céide fields evidence.

Prof Warren, who has collaborated with Prof Caulfield on Heritage Council-funded work on prehistoric sites, said Dr Whitefield had not presented sufficiently strong evidence of Bronze Age origins for the field system at Céide.

He said Dr Whitefield had also “cut the Céide Fields out of their regional context”.

Prof Warren has made key discoveries from fieldwork about how hunter-gatherers and farmers lived in the Céide Fields.

Dr Whitefield will speak about the place of the Céide Fields in Irish prehistory at Galway’s Town Hall Theatre on Fri at 1.10pm.