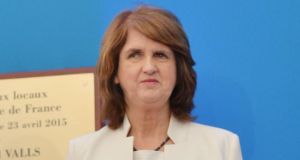 Tánaiste and Minister for Social Protection Joan Burton has defended her decision to proceed with social welfare reforms as essential to helping lone parents get out of the poverty trap. Photograph: Alan Betson / The Irish Times.

Tánaiste and Minister for Social Protection Joan Burton has defended her decision to proceed with social welfare reforms as essential to helping lone parents get out of the poverty trap.

Ms Burton said she plans to push ahead with reforms where lone parents on welfare will be required to seek employment or training as soon as their youngest child reaches seven years of age.

The changes, which are due to come into effect early next month, have been criticised by lone parent representative groups who say they will end up penalising thousands.

The groups say the proposed changes will hit single parents working part-time and could force many to give up work.

But Ms Burton who met lone parent groups on Wednesday, insisted that the reforms are necessary as the existing system of support is not working in helping to exit poverty.

Ms Burton said that the meeting with the lone parent groups went “extremely well” and they had a “very good discussion” but she was determined to push ahead with the planned reforms.

The aim of the changes is to make education, training, work experience, community employment and employment available to lone parents after their youngest child reaches seven, she said.

The State has put a huge amount of money into supporting lone parents over the years but various organisations have found lone parents and their children are still hugely at risk of poverty, she said.

“The best way to reduce that risk of poverty for lone parents and their children is to look to find them well paid employment, careers and work opportunities and that is what the policy is about.”

Karen Kiernan of One Family, who met Ms Burton on Wednesday, said before the meeting that the changes may force many lone parents to quit work resulting in even more people in poverty.

“This reform process is forcing lone parents who are already working part-time to give up their jobs because they no longer meet the eligibility criteria and because work does not pay,” she said.

But Ms Burton said that Dept of Social Protection officials will be available to meet any lone parents who are facing any difficulties over the proposed changes including those working part-time.

“We will take into account any issues which will arise for people that are particularly difficult. We’ve been doing that for the last two years - we’ve done it as well in relation to the youth guarantee.

Ms Burton said her department used to be one “that basically just paid out social welfare income to people” but it now had two responsibilities.

“One side is to pay out income to people who require social welfare income and the other side is to actually help people to find employment or to start a business or to become self employed,” she added.

“It’s what we see in Scandinavian countries - it’s our wrap around service- it’s both income support when you need it but it’s also the department who is going to help you to get back to work.”