Bruce Springsteen admits feeling like a fake despite success 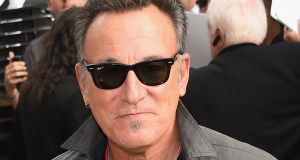 Bruce Springsteen: the mark of a mature artist is being able to live with contradictory feelings. Photograph: Michael Loccisano/Getty Images

Bruce Springteen has revealed that he still feels sometimes like a “complete fake” despite his huge success.

In the first pre-recorded interview filmed outside Ireland for the Late Late Show, Springteen spoke of how success only accentuated his feelings of self-doubt.

Late Late Show host Ryan Tubridy travelled to London to interview Springsteen who is promoting his autobiography Born to Run.

Springsteen revealed that though he appeared on the covers of Time and Newsweek magazines in the 1980s, at a time when few entertainers received such an accolade, he felt only terror.

“That should have been an ‘I’ve arrived’ moment but it was like ‘I’ve arrived, let me out of here! Let me get away as quick as I can,” he said.

“I felt a tremendous amount of pressure, all of which I asked for of course, but at the same time I felt very ambivalent. I have a lot of ambivalence. Ambivalence has been one of the great signatures of my life, so, whenever those moments would arrive, instead of being able to sit back and just enjoy it, which I have to say I probably am able to do today, when I was younger I was not able to do it at all”.

And he told the Late Late host that there is always a part of him that feels like a “charlatan”.

“We are all made up of insecurities so there is always some part of me that’s ‘well, yeah I’m a complete fake but I am also the realest thing you have seen in your life. I will be realer than you have ever imagined’,” he said.

Springsteen acknowledged that what he believed was contradictory, but responded: “The mark of an advanced, or certainly of an adult artist, is being able to hold that paradox in your mind at the same time, hold those conflicts in your mind without letting them drive you crazy and understanding that they are just a part of living.”

He also spoke about his fears that someone would die when he played Slane with the E Street Band in 1985.

“We hadn’t played for 90,000 before, it was the first time. We came out and the audience was rowdy and swaying this way and swaying that way, and people were dropping into little holes in the crowd. All I was thinking was ‘someone is going to get hurt and it’s going to be on me, it is going to be my responsibility’.

In his autobiography, Springsteen also writes of his visit to his “old stomping ground” the RDS in June 2014 to see his daughter Jessica compete in the Nations Cup for the USA.

He revealed that around that time he became severely depressed and contemplated suicide.

“Standing, walking, sitting down, everything brought waves of an agitated anxiety that I’d spend every waking minute trying to dispel.”

While out with his wife Patti in Dublin and “doing my best to fake that I was a sane citizen”, he finally decided to call his pharmacologist who prescribed Klonopin (Clonazepam), an anti-anxiety medication.”

The interview concluded with Springsteen telling Tubridy that he is in a good place now and that his gigs in Dublin last year were “very satisfying”.

“It is very lovely,” he said. “I am deeply appreciative and I am blessed at this point in my life to have an audience like that, to be able to perform still to the best of our abilities, to bring more glory to our band’s name. And it’s a good life, I have no complaints.”

1 Covid-19: Six further deaths as reproduction rate ‘at or above one’
2 Mother and five children sleeping in car while seeking accommodation
3 Covid wage subsidy recipients cannot draw down funds from State mortgage scheme
4 ‘Prepare for January’: European Commission warns as Brexit trade talks stall
5 Donald Trump is an amateur populist – the real trouble is yet to come
Real news has value SUBSCRIBE