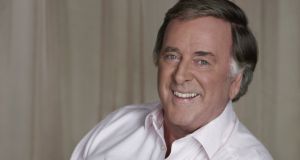 Terry Wogan (77) “ acted in no small way as a bridge between Ireland and Britain,” Taoiseach Enda Kenny said as he paid tribute to the veteran broadcaster who died from cancer on Sunday

His family issued a statement, saying: “Sir Terry Wogan died today after a short but brave battle with cancer.

“He passed away surrounded by his family. While we understand he will be missed by many, the family ask that their privacy is respected at this time.”

President Michael D Higgins, and British prime minister David Cameron all paid tribute to Limerick-born Wogan, as did many broadcasters and other media colleagues.

President Higgins said Wogan’s was one of the best known voices in Britain and Ireland.

“People in Ireland will remember his early career in Irish broadcasting. On his move to Britain his voice became one of the most often quoted, favourite radio voices.

“Always proud of his origins in Limerick, he made many returns to his native country for television and radio projects.

Video: Terry Wogan signs off on his breakfast show

“His rise to the top of radio listenership in the United Kingdom was a great tribute to his breadth of knowledge and in particular his unique, very personal sense of humour.”

A book of condolences in his memory will be opened in the council offices of his native Limerick on Monday morning.

British prime minister David Cameron said Britain had lost “a huge talent – someone millions came to feel was their own special friend”.

“I grew up listening to him on the radio and watching him on tv. His charm and wit always made me smile,” Mr Cameron tweeted.

BBC director general Tony Hall said: “Terry truly was a national treasure. Today we’ve lost a wonderful friend. He was a lovely, lovely man and our thoughts are with his wife and family.”

Wogan had a 50-year career on television and radio, including presenting Wake up to Wogan on BBC Radio 2 and the Wogan chat show. He was also the voice of the Eurovision on the BBC for more than 30 years.

He worked in banking for a few years after college and then began his career in broadcasting at Radio Éireann (RTÉ) in Dublin as a newsreader and announcer. “Dublin was very much part of his life although he was born in Limerick,” said Sky presenter Eamonn Holmes. He added that if, as a young Irish broadcaster, you got Wogan’s blessing it was a “marvellous, marvellous thing”.

He took over his own daily show on BBC Radio 1 and 2 in 1969. In April 1972 he took over the morning show on Radio 2. He presented this until 1984, shortly before his three times a week chat show, ‘Wogan’ began on BBC One. The programme ran for the next seven years.