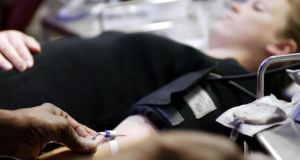 The Irish have been targeted because more native Irish people have the useful O+ blood type, B+ and A- blood types than the British population in general.

The British National Health Service has appealed for Irish people living in the country to donate blood.

The move is part of the NHS’s Inclusivity Marketing Group (IMG) initiative, which targets groups and individuals who might have blood groups which will be of benefit to their transfusion services.

The Irish have been targeted because more native Irish people have the useful O+ blood type (47 per cent versus 37 per cent), B+ and A- blood types than the British population in general.

On its website, the NHS states: “It is vital that our blood donors are as diverse as the wider population. This is because we need a blood mix which matches the populations.

“The Irish community have some blood types which are more common – examples being O+, B+ and A-.

“As such, it is important that members of the Irish community who are interested in donating blood, step forward and do so.”

Consultant haematologist Dr Barry White, of St James’s Hospital in Dublin, said yesterday he was surprised that a specific request had been made for Irish blood.

“I didn’t think we were that different,” he said.

But he pointed out that blood group O (either + or -) is the universal donor and is therefore “highly sought after”.

Explaining the importance of blood group O Dr White said: “If I’m giving somebody blood group O, that means they won’t . . . react . . .Whether you’ve been given blood group A, B, AB or O, you won’t react to O.”