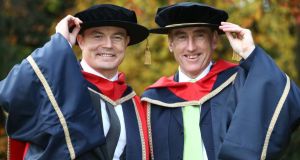 Brian O’Driscoll and cyclist Sean Kelly pictured at Dublin City University where Brian, Sean and Katie Taylor (who was not present) were confered with Honorary Doctorates in Philosophy in recognition of their contribution to Irish sport. Photograph: Colin Keegan/Collins 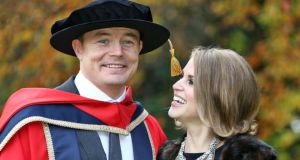 “Obviously he’s going to make everyone call him doctor now,” observed Brian O’Driscoll’s wife Amy Huberman as the rugby player received an honorary doctorate from Dublin City University this morning. His parents are both doctors but he “just totally cheated and did it the easy way,” she joked.

And he did seem to be enjoying the idea after he was introduced to the audience as Dr Brian.

“Dr Brian O’Driscoll - that’s really bizarre,” he said. “There are a couple doctors in our house already, but of the medical variety, and I’m sure my sisters are going to be giving me plenty of ribbing about that.”

He said he was humbled to be getting such a prestigious honour. “As someone who plies their trade in a team capacity I wouldn’t say I’m always fully comfortable to be singled out for individual praise but I’m not going to lie to you, this feels pretty good.”

He also thanked his family and team mates but said “I would absolutely expect when I go into camp later on tonight for them to call me Dr O’Driscoll”.

The rugby player was awarded a Doctorate of Philosophy at DCU, the highest award the university our the college can bestows.

He also paid tribute to his fellow honorary doctors, cyclist Sean Kelly and Olympic gold medallist Katie Taylor. The boxer was honoured in her absence as she had training commitments before her homecoming bouts in Bray and Dublin later this month.

Speaking before the ceremony, Mr Kelly said receiving the doctorate was a magnificent honour. “There’s a great sense of pride. It’s something I didn’t get in my earlier days unfortunately.” He recalled how he was happy to leave school after his primary education but came to regret it in later life.

“When I retired there was a difficult period, as it is for so many sports people,” he said. “If you are in your chosen sport for 15 plus years, it’s difficult to adapt to normal life.”

He said he never dreamed he would receive a doctorate one day. “No, never... It’s just great to be here today.”

In her citation for the cyclist, DCU’s Dr Sarah Ingle said Mr Kelly was “an unsung hero and ambassador for Irish cycling”. He was “ a true sportsman, a complete professional and a gentleman”. In his citation for Brian O’Driscoll, DCU’s deputy president Jim Dowling said the Dubliner was “rounded and grounded, a true role model for youth in Ireland”. He was a “man of honour who has made such a positive impact on the Irish stage and will no doubt continue to do do in the next phase of his life.”