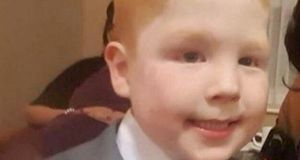 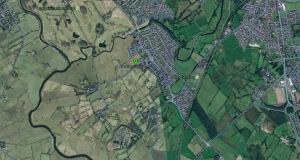 The boy was taken from the river more than 45 minutes after he entered it, near Tullaghgarley, Co Antrim, and was immediately airlifted to hospital, the Community Rescue Service said.

A boy who was swept more than four miles down a fast-flowing river in Northern Ireland on Saturday before being pulled out by rescue teams has died.

A major search was launched after 5-year-old Kayden Fleck fell into the Braid River near Skye Park in Ballymena, Co Antrim, at about 1pm on Saturday.

The PSNI confirmed on Saturday night that he had since died in hospital.

The boy was taken from the river more than 45 minutes after he entered it, near Tullaghgarley, Co Antrim, and was immediately airlifted to hospital, the Community Rescue Service said.

Sean McCarry, regional commander of the organisation, said teams had worked closely with the PSNI, fire service and air ambulance during the multi-agency response.

Thoughts are with the family of wee Kayden Fleck. Heartbreaking. pic.twitter.com/TUGcWAakbG

A young child pulled from the Braid river in Ballymena earlier today has passed away in hospital. pic.twitter.com/372ouNPO6a

Mr McCarry said emergency services were alerted at about 1pm after the boy entered the river near the Ecos Centre.

He said: “He got swept away quite fast with it, he was travelling quite a distance. He was doing a mile in under 15 minutes.”

Mr McCarry said rescuers were “running desperately” after the boy, while a police helicopter observed from above and reported any sightings.

“The police were co-coordinating and telling us where we needed to go to next and we were just trying to get ahead of him in the river,” he said.

“Eventually that happened and he was pulled out of the river and put into the air ambulance.”

The youngster spent more than 45 minutes in the water and travelled a minimum of four miles down the river, Mr McCarry said.

A spokeswoman for PSNI said: “A child has been pulled from the Braid River in Ballymena following a large search-and-rescue operation.

“The boy, believed to be five years old, has been taken to hospital by air ambulance.” – Press Association