Bonfires lit across Northern Ireland ahead of 12th marches 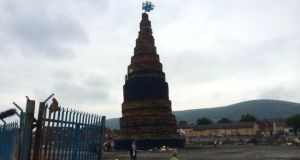 The nearly 80 foot tall bonfire pyre at Lanark Way near the Shankill Road in Belfast before it was set alight as part of the Eleventh Night celebrations. Photograph: Dan Griffin/The Irish Times 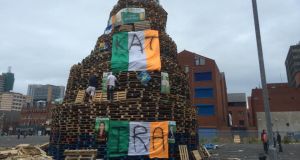 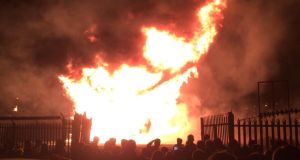 Bonfire pyres wreathed with Irish Tricolours and other nationalist symbols were set alight across Northern Ireland tonight as the annual Eleventh Night celebrations got under way.

In Belfast, crowds assembled through the evening as locals put the final touches on a number of massive pyres. A loyalist pipe band marched through the streets around Sandy Row while pubs in unionist areas were packed to overflowing.

In the early evening, children played on bouncy castles and other amusements at a street festival along the Shankill Road. Nearby, people came to have their photographs taken at the base of an enormous bonfire at Lanark Way.

The 75ft tall structure had started to lean slightly to one side by evening time, prompting a local to voice his concern to onlookers. “Don’t go too close to it. It’s going to go that way,” he told one group, indicating the spot where he reckoned the massive thing was going to come crashing down.

“They built it too big,” he said. He wasn’t the only one who thought so. Belfast DUP councillor Brian Kingston was reported in the press yesterday as saying: “Concerns have been expressed to me by the police about the height of this bonfire and the potential damage to local houses and a filling station.”

In the end the bonfire passed off without much incident, however.

The Eleventh Night bonfire tradition supposedly has its roots in the 17th century when fires were said to have been lit along the banks of Belfast Lough to guide King William of Orange to Carrickfergus on his arrival in Ireland in 1690.

Although promoted as a cultural event, the celebrations are dense with jingoism as well as sectarian overtones, with anti-Catholic songs and slogans being chanted in many areas during the night.

Earlier this week concern had also been raised after a statue of the Virgin Mary was allegedly taken from a local memorial and placed on the pyre at Lanark Way.

It had reportedly been returned before the fire was lit but the dozen or so Irish Tricolours and Sinn Féin election posters remained firmly in place when the tower went up in flames.

In loyalist Sandy Row a group of tourists looked on as a teenage boy clambered along a pyre and carefully unfurled a Tricolour before pinning it onto a couple of pallets.

“It’s amazing. Let’s just leave it at that,” said one of the tourists, from north Yorkshire and visiting Ireland for the first time in 60 years, when asked what he thought of the spectacle.

Today will see the biggest annual parading day in the North’s marching season.

Last year severe loyalist violence broke out in north Belfast on the night of the 12th of July when Orangemen were blocked by the PSNI on the Woodvale Road from marching past the Ardoyne shops.

This year there is guarded hope of a more peaceful outcome, with the Orange Order deciding that its return feeder parade that is barred from passing by the Ardoyne shops will not seek to engage in a standoff with police.