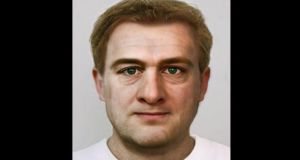 An image of the facial reconstruction of the man was done in an attempt to find him.

Gardaí in Galway have established the identity of a man whose body was found in woods in Connemara in 2006, after extensive national and international investigative work involving a forensic anthropologist and forensic dentist.

The man has been named as Arno Schmitz (55), who had come to Ireland from the Neumünster area of Germany in September 2005,and last spoke to a sibling before Christmas that same year.

Schmitz had never been reported missing and had no identification on his person when found.

However, a cleaning cloth for his Rayban sunglasses and a carton of fruit juice proved to be key items in solving the case.

Chief Supt Tom Curley of Galway Garda Station said it was due to the persistence of his colleagues,working with Galway west coroner Dr Ciaran McLoughlin and international agencies and experts, that the identification was eventually resolved .

Schmitz’s body was discovered in woods by Lough Inagh on December 8th, 2006, and a post mortem concluded that there was no evidence of trauma or injury.

He was estimated then to be aged between 44 and 66 years, and was described as 5 ft 7.5 inches in height and of stocky build.

It also contained a spectacle case with Rayban sunglasses and a cleaning cloth, bearing the “Mückenheim-Optik” and an address at Neumünster, Germany.

Initial inquiries in Germany yielded no information as the sunglasses were not on prescription.

The Garda Missing Persons Bureau and Interpol were contacted, and all particulars were circulated, including a DNA profile - but there was no match on missing persons’ lists.

Dr McLoughlin also made contact with University of Dundee senior lecturer in forensic anthropology Dr Caroline Wilkinson in Scotland, seeking assistance with a facial reconstruction of the man which was released to the media in 2009.

“We thought that as he was travelling light he must have belongings back in Galway, but inquiries with bed and breakfasts in Connemara and in Galway city proved fruitless,”Chief Supt Curley said.

The case was reviewed in December 2009, featured on RTÉ television’s Crimecall in late 2009 and again in June 2013, but it was another review in December 2013 that led to a breakthrough.

Chief Supt Curley said focus was put on the fruit juice carton, which was dated November 3rd, 2005, and had a shelf life of about 52 days.

Giving a week from manufacture to distribution, this meant that the fruit juice could only have been on sale in retail outlets sometime after November 10th, 2005.

In April of this year, gardaí asked Interpol to circulate a press release to German media, particularly in the Neumünster area, and in July (2014) media in the city of Kiel carried reports and an image of a facial reconstruction of the man.

As a result, two people contacted German police - a man who said the face resembled that of his brother, and a woman who said he resembled a neighbour of hers from 2004.

The man, Bernd Schmitz, told German police that his brother Arno had gone to Ireland in late September 2005, and he had last spoken with him before Christmas 2005. He had not reported him as a missing person.

It is understood that Arno had found work and had a keen interest in music.

He confirmed to gardaí the records matched the dental profile taken from the body.

DNA profiles also “strongly supported” the probability that Arno and Bernd were brothers.

Mr Schmitz is expected to travel to Ireland next month to visit his brother’s grave on Omey island.

“We have many reports of missing people with no body, but in this case we had a body but no report that anyone was missing,”Chief Supt Curley said.

In that sense it was a “sad and unusual” case, with a positive result, he said.