Body of fisherman recovered after search in Galway Bay 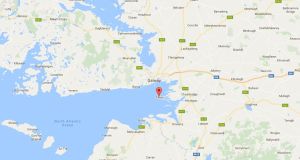 The alert was raised after discovery of a six-metre potting vessel in the inner part of Galway bay near Tawin island.

The body of a fisherman has been recovered in Galway Bay after an extensive air and sea search.

The man, who has not been named until relatives are informed, was wearing his lifejacket and was showing signs of life when he was taken from the water by the RNLI Aran lifeboat at about 6.40pm.

Efforts were made to resuscitate him, and he was taken by ambulance to University Hospital Galway but was pronounced dead shortly after arrival.

The alert had been raised about three hours earlier when an unoccupied boat was found at Tawin island off Oranmore.

The six metre potting boat still had its engine running when it was located, according to Valentia Coast Guard radio station, which co-ordinated the emergency response.

The RNLI Aran island and Galway bay lifeboats and the Irish Coast Guard Shannon-based helicopter were tasked. The the Aran lifeboat recovered the man from the water west of the Blackrock buoy in the inner bay.

His vessel was towed back to its home port close to Clarenbridge in south Galway bay.

Members of the RNLI Aran volunteer lifeboat crew were at sea for over 14 hours on Wednesday, as they had been called out shortly after 4am to assist a 60 metre boat which had engine difficulty close to Slyne Head.

The Norwegian vessel was taken in tow to Rossaveal, and the lifeboat was then diverted to assist in searching for the missing fisherman.