Bloodthirsty rage on the streets of Galway 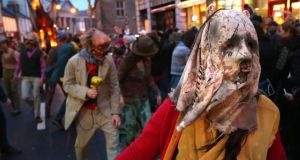 Macnas ghouls stalk the streets in Galway city centre during the Halloween parade ‘Symphony for the Restless’ this evening. Photograph: Joe O’Shaughnessy 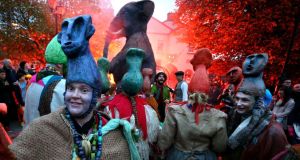 Dancers perform in the Macnas Halloween parade as it passes over the Salmon Weir Bridge this evening. Photograph: Joe O’Shaughnessy

Corpulent Crom, Galway’s new giant, released his rage on the city’s streets today as Macnas marked the festival of Samhain.

Small firstlings shivered as they feared sacrifice, and the ground cracked asunder, or so it seemed, as the 16-foot tall mountainy man escorted by masked spectres on stilts strode out over the river Corrib.

Hot in his pursuit was his “Symphony for the Restless” – a beautiful winged Pegasus, a “hootin’ tootin” Medusa made out of an old gas heater and tractor tyres, and a hip-wiggling elephant said to be the reincarnation of late poet Maya Angelou.

Primal and demonic drumming has been a Macnas hallmark in previous years, but Crom’s preference was for jazz, as performed by a brass ensemble housed in a handcrafted steel abandoned mansion, while Youth Ballet West ballerinas pirouetted and and an assortment of masked and manic figures beckoned to spectactors below.

Gardaí estimate 30,000 people turned out in gale force south-westerlies for this year’s carnival – now a fixture at Hallowe’en - which paid homage to Crom Croich.

The bloodthirsty deity was once the island’s idol before being upstaged by St Patrick, and legend has it that up to a third of healthy children were slaughtered for his annual harvest offering.

Thankfully, there was no blood-letting in Galway, and Crom wore a benevolent air as darkness fell and he was steered and worked by his ten-strong crew through the city and to the Claddagh basin.

“Son of the Grandmother Giant,”several students who had seen the recent Royal De Luxe star turn recently in Limerick suggested.

“Or Michael Fitzmaurice, the new Roscommon-South Leitrim TD !”quipped one of their group.

Up to 300 volunteers participated, as did many local artists, with visiting participants including broadcaster Dylan Haskins and singer Lisa Hannigan, both making a “culture podcast”.

Five of Macnas’s images are set to invade Dublin tomorrow for the Bram Stoker festival.