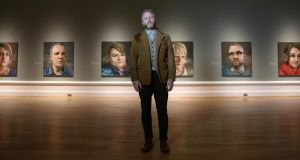 A new exhibition, Silent Testimony, by Belfast artist Colin Davidson explores the theme of loss and features people who suffered bereavement and injury during the Troubles.

Through the victims’ group, Wave, Mr Davidson asked 18 people to sit for him and all accepted. “I was welcomed into their lives and homes and made 18 new friends,” he said at the launch of the show in Belfast’s Ulster Museum yesterday.

The exhibition, opening today and running until January, features people who, during the conflict, lost fathers, a mother, husbands, sons, daughters, brothers, a sister-in-law and nieces. One of the sitters was blinded in the Troubles, another was paralysed.

Senator George Mitchell, who chaired the breakthrough 1998 Belfast Agreement talks, notes in the exhibition catalogue that the depth of continued suffering is witnessed primarily through the eyes in the 50in x 46in (1.27m x 1.17m) portraits which took a year to complete.

“None tell the sad story better than the eyes of the people in these portraits. It has been said that our eyes are windows into our soul. They also are the messengers of our sorrows.”

This has been a personal rather than a commercial venture for Davidson who has previously completed portraits of Seamus Heaney, Brian Friel, Roddy Doyle and Brad Pitt.

The sitters cover the two islands. Among the subjects are Thomas O’Brien, who lost his brother, John (23), sister-in- law Anna (22), and nieces Jacqueline (17 months) and Anne Marie (5 months) in the 1974 UVF Dublin-Monaghan bombings; and Mo Norton whose brother Terence Griffin (24) was one of 12 people killed in an IRA bomb on a coach on the M62 in England the same year.

Davidson said inspiration for the project went back to the 1998 agreement which, he said, left him with a “nagging question, what do the people who have suffered loss get from this?”

“I feel this vast section of our community are actually paying a price for our peace. In the rhetoric of moving on and being told as a community to move on there are tens of thousands of people who can’t move on. Their sense of hope is gone.”