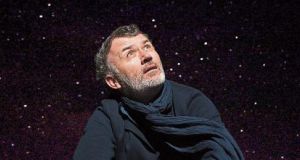 Tommy Tiernan: Made joke on Radio Foyle about Arlene Foster

The BBC has apologised for an “inappropriate” joke comedian Tommy Tiernan made about DUP leader Arlene Foster.

The comments made by Tiernan, which were broadcast during Mark Patterson’s Radio Foyle programme on Tuesday, have since been removed from BBC catch-up services.

Speaking about his “interest” in the DUP leader, Tiernan said: “If she wasn’t in politics I can see her working single-handedly on a tiny little farm in south Fermanagh, driving cattle up some country lane”.

He then, apparently imitating Ms Foster, said: “Go on you pups, you fenian bastards ye, go up you fenian . . .”

DUP East Derry MP Gregory Campbell told the News Letter he believed the nature of some of the language appeared to be “excessive”.

“His humour can be quite lively if it is delivered and taken in the spirit it is intended to be, but some of that stuff appears to be, in terms of the language used anyway, almost deliberately provocative to try to engender some sort of outrage,” he said.

The BBC apologised and said the language used was “clearly inappropriate”. A statement said: “We unreservedly apologise for its use and any offence caused.”

A BBC Northern Ireland spokesman said the apology was “unequivocally for both” the use of the words fenian and bastards.

A DUP spokesperson said Ms Foster would not be commenting on the matter.

Mr Tiernan could not immediately be contacted for a response.