In the past 18 months, the Government got €4.1 billion back from the financial sector 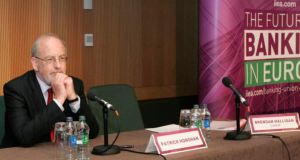 The future of banking in Europe: Patrick Honohan, governor of the Central Bank, at an Institute of International and European Affairs conference on banking

Ireland’s €64 billion rescue (roughly 40 per cent of our GDP) of the financial sector post the global financial crash in late 2008 was one of the key reasons why the country had to go cap in hand to the EU and the IMF for a bailout in late 2010.

All of the domestically-owned institutions had to be propped up by the State in one way or another as capital markets had lost confidence in our banks and refused to lend to the sovereign.

Following the prudential capital assessment review in 2011, the State provided €18 billion to AIB (including EBS), Bank of Ireland, and Permanent TSB to shore up their balance sheets. The banks also benefitted from the eligible liabilities guarantee, or bank guarantee as it is often referred to, and liquidity from the European Central Bank.

Since then the banks have been slowly repairing themselves. This has involved cost restructuring, deleveraging their business, weaning themselves off ECB funding and slowly returning to capital markets and normalised lending.

There’s a long road to travel and it’s fair to say that many commentators see the banks as the biggest threat to our smooth exit from the troika bailout if they fall foul of the euro area stress tests next year and require more capital.

Free of State’s shackles
Bank of Ireland is now at the stage where it is just 14 per cent owned by the State and has paid over €5.9 billion in various fees and charges since the crash. It is almost free of the State’s shackles. Its preference share transaction last week will save it €55 million a year in dividend costs, allow it to avoid an additional €425 million increase in the cost of the shares by not redeeming them before next March and removes the restriction on it paying a dividend to ordinary shareholders.

This is not to say that everything is rosy in the garden. Last week, the results of the balance sheet assessments recently carried out by the Central Bank began to dribble out. These assessments were a requirement of our troika exit and a dry run of sorts for the euro area capital stress tests next year by the European Central Bank. The clear message from AIB, Bank of Ireland and PTSB was that they had adequate capital.

However, in a detailed statement Bank of Ireland revealed that the Central Bank had concluded that it should take an additional €1.3 billion in provisioning against its mortgage and commercial loans. AIB and PTSB made no comment on provisioning but the expectation is that the Central Bank has made similar findings against the institutions. Bank of Ireland publicly disagreed with the Central Bank’s findings, and said it was in “ongoing negotiations” with the regulator on the matter. It is highly unusual for a bank and the regulator to have such a public disagreement.

We will probably have to wait until the banks publish their annual accounts before we get a clear idea of what impact the assessments have had on their balance sheets.

While the banks are returning to health – Bank of Ireland is already back in profit, while AIB is expected to return to profitability at some point next year – this has come at a cost to consumers. ECB interest rates are at an all-time low of 0.25 per cent but recent cuts have not been passed on to variable rate customers, who are also facing increased fees and charges for other services.

One former senior banking executive who asked not to be named said the retail banks here were nowhere back to normalised lending. “There’s an unwillingness to lend, there’s no question about that,” the executive said. “The pillar banks [AIB and Bank of Ireland] are happy to renew lending for good clients but they’re not doing much for new customers. The last few years have all been about preserving capital and worrying about provisioning and costs. When your head is in that space it’s hard to think about the economy.”

When asked about the sale of the Bank of Ireland preference shares, Minister for Finance Michael Noonan told The Irish Times it was “very significant” and sent “all the right signals” to capital markets about Ireland.

Building confidence
“This was a very big transaction and what the markets see is private investors prepared to buy into an Irish bank, and they see us using the proceeds to add to our cash buffers and improve our debt profile. This all builds confidence and further improves market sentiment towards Ireland as we are getting back to normal market funding.

Since we announced our [bailout] exit strategy there has been a number of very important developments, including the quarter-three employment figures, the debt issuances by AIB and PTSB, the strong exchequer performance in November, and Nama [the National Asset Management Agency] announcing it has achieved the key milestone of €7.5 billion senior debt redemptions by year-end. All of these things build confidence in Ireland’s recovery at home and abroad.”

On the question of attracting external investment to AIB or PTSB, which are both more than 99 per cent owned by the State, Mr Noonan said: “Our focus is to get these banks back to profitability and if we do that then private investment should follow. At this point the indications in that regard are encouraging as investors are looking once again at Ireland and Irish financial assets.”

The Minister dismissed concerns that Bank of Ireland’s seemingly healthier position, and the fact that it is just 14 per cent owned by the State, might distort competition in Irish banking, particularly with ACC and Danske Bank set to exit the retail market in 2014. “No. We need strongly capitalised banks to be able to lend into the economy to support the recovery.”

The Minister declined to comment on where the Irish banks might obtain additional capital if they come out on the wrong side of next year’s stress tests.

He has stated previously that there is no evidence at this time that the banks will need further capital, and noted that the balance sheet assessments carried out by the Central Bank showed that no additional capital was required by the three domestic banks.

John Reynolds, president of the Irish Banking Federation and former chief executive of KBC Bank Ireland, also believes our financial institutions are “well capitalised” but added that a lot will depend on the questions asked in the European stress tests next year. The parameters of these tests have yet to be fully laid out.

Reynolds noted that a continued recovery in the economy would be beneficial to the banks. Increased employment should help people to pay their mortgages, while the recent rise in property values, if sustained, would boost asset values.

“I’d be surprised if you didn’t see capital markets being amenable to fundraisings by Irish banks in 2014 and 2015.”