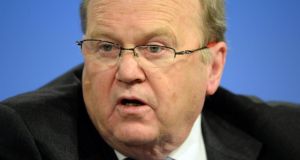 Minister for Finance Michael Noonan: said Freedom of Information documents released to The Irish Times showing tensions between his department and IBRC illustrated that his officials were doing their job. Photograph: Eric Luke/The Irish Times

Mr Aynsley was chief executive of the State-owned bank when it approved the sale of the building services group to businessman Denis O’Brien in a transaction that cost the taxpayer €110 million in 2012.

In a letter to Minister for Finance Michael Noonan, Mr Aynsley’s lawyers, Eames Solicitors, accuse the department of releasing material that is a “serious attack on an internationally and highly experienced banking expert”.

The solicitors highlight passages in a briefing note dated July 2012, released to Catherine Murphy TD by the department, stating that officials were concerned at the number of large transactions that were “poorly executed” by IBRC under Mr Aynsley’s direction.

“The performance of management in executing these transactions raises the question of the effectiveness of the chief executive officer,” the note from the department’s shareholder management unit says.

Eames Solicitors argue that the documents released to Mr Murphy are partial, selective and designed to support an agenda of certain department officials who opposed independent decision making by IBRC’s board and Mr Aynesly.

IBRC, which took over Anglo Irish Bank and Irish Nationwide, wrote €110 million off Siteserv’s €150 million debt when it was sold Mr O’Brien’s Isle of Man-registered Millington for €45 million. Shareholders received €5 million while the bank got €40 million. It later emerged that French group Altrad was prepared to pay €60 million for Siteserv.

Mr Noonan said Freedom of Information documents released to The Irish Times showing tensions between his department and IBRC illustrated that his officials were doing their job.

He has asked IBRC’s liquidators, Kieran Wallace and Eamonn Richardson of KPMG, to review all deals done by the bank that involved a write-off of more than €10 million to the State, and expects them to complete this by the end of August.

Mr Noonan acknowledged that he and his officials were concerned at the flow of information from IBRC during 2012. This led to the appointment of an assistant secretary, with experience of banking, to its board.

“There were a lot of issues around at the time and while inquiries were made, I am satisfied that the action I took was sufficient,” he said.

Mr O’Brien said he was simply the buyer and had nothing to with either the sales process or any other offers. He added that revenues and employee numbers had doubled since the deal. Mr O’Brien also offered to appear before the Public Accounts Committee, should it examine the sale.