Attempt to rescue Stormont in wake of Robinson exit 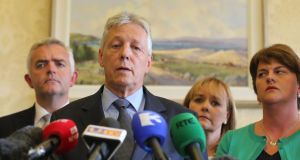 Peter Robinson: “Standing aside as First Minister and other DUP Ministers will resign with immediate effect with the exception of Arlene Foster.” Photograph: PA

The British and Irish governments will try this weekend to determine if there is any means of rescuing the Northern Ireland Executive and Assembly after Peter Robinson stepped aside as First Minister and withdrew most of his Ministers from the Executive.

Earlier, Taoiseach Enda Kenny intervened to try to persuade the SDLP to support an adjournment of the Northern Assembly, as Mr Robinson requested, to test whether the crisis over Mr McGuigan’s killing and the deadlock over welfare reform, could be resolved in four to six weeks of concentrated talks.

However, the SDLP refused to support the adjournment with the result that Mr Robinson had to decide whether to carry out his threat to resign from the Executive and thus bring down Stormont and trigger Assembly elections.

Mr Robinson bought some time for possible more negotiations after he stepped aside as First Minister, however, while not “technically” resigning from that post, and handing over to Arlene Foster to act as both Minister of Finance and acting First Minister.

“In light of the decision by republicans, nationalists and the UUP to continue with business as usual in the Assembly, I am therefore standing aside as First Minister and other DUP Ministers will resign with immediate effect with the exception of Arlene Foster,” said Mr Robinson.

My statement announcing the resignation of DUP Ministers: http://t.co/RZyT8SXH0m

“I have asked Arlene to remain in post as Finance Minister and acting First Minister to ensure that nationalists and republicans are not able to take financial and other decisions that may be detrimental to Northern Ireland,” he added.

In the meantime, British and Irish ministers and officials will keep in close contact to determine if Stormont can be rescued, said senior sources.

Mr Flanagan said he greatly regretted the DUP decision. “What we want is for the devolved powersharing Executive and Assembly to work as envisaged in the Good Friday agreement and deliver peace, prosperity and reconciliation for the people of Northern Ireland,” he said.

She said that over the past 20 years Northern politicians had surmounted similar difficult obstacles. “There is an urgent need to get the parties together, find a way to repair those working relationships.”

Mr Storey who with Mr Gillen and Mr Copeland were released “unconditionally”, is now planning to sue the PSNI for alleged wrongful arrest.