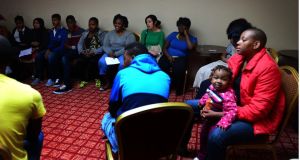 health issues among asylum seekers, within the direct provision system, has been defended by the Department of Justice.

There has been increasing criticism of conditions and the time asylum seekers spend in such institutional residences and concern that this causes psychological damage.

In a statement to The Irish Times, the department said an asylum seeker who “removes him or herself from their country of origin” to live in the communal setting of direct provision, with all the uncertainty attached to their longer term status, is “bound to be under stress to a greater extent than the settled population”.

It also warned that the causes of mental health issues were “complex” and it was difficult to ascertain whether mental illness was a result of pre-existing or current conditions or a combination.

The consultant psychiatrist, who has worked with asylum seekers in Ireland and abroad, said the department was trying to “defend the indefensible”. Dr Bracken said he had no doubt the system played “a major role in damaging the mental health of those who must live in it for prolonged periods”.

Dr Bracken also condemned the lack of work opportunities for asylum seekers, saying a ban on them being allowed to work cut off options which could give them more control over their lives and better mental health.

His comments were echoed by Dublin GP Dr Austin O’Carroll. He said he regularly treated asylum seekers with mental health issues. His patients had spoken of anxiety and hopelessness, had self-harmed and there had been a number of suicides.

He said the direct provision system “exacerbates pre-existing conditions” and can be “an actual cause of mental health problems”.

Advocacy groups are also concerned about the lack of information on mental health cases within the direct provision system.

The department said there was a lack of verifiable data on mental health concerns regarding asylum seekers and the RIA “does not have access, as a matter of course, to a person’s confidential records”.

Irish research on mental health issues among asylum seekers is limited. But it is widely accepted that post-traumatic stress disorder is more prevalent in direct provision than in the general population.

Minister for Justice Frances Fitzgerald has said a working group will be set up next month to review the direct provision system. A new system for processing asylum seekers would also be introduced.