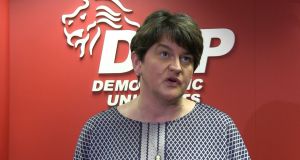 Arlene Foster said the DUP will continue to work with the British Government and will also use any discussions with the Taoiseach to encourage efforts towards a sensible deal. File photograph: David Young/PA Wire

The DUP leader Arlene Foster has said she was “encouraged” by Boris Johnson’s commitment to a “sensible” Brexit.

Her comments came after the British prime minister’s meeting with Taoiseach Leo Varadkar in Dublin on Monday morning.

Ms Foster said she hoped the discussions in Dublin would “lay the foundation for a way forward”.

The DUP leader issued her statement against some speculation that the British government could propose a Northern Ireland only backstop with a restored Northern Executive and Assembly having a role in how it would be activated.

The tone of Ms Foster’s statement indicated that she wasn’t expecting such a move from Mr Johnson.

She said the DUP had never been champions of exiting the European Union without a deal. “To secure a sensible deal which respects the economic and constitutional integrity of the United Kingdom will require pragmatic discussions on all sides,” she said.

“The prime minister has already ruled out a Northern Ireland only backstop because it would be anti-democratic, unconstitutional and would mean our core industries would be subject to EU rules without any means of changing them,” added Ms Foster.

“We will continue to work with the government and will also use any discussions with the Taoiseach to encourage efforts towards a sensible deal,” she said.

Meanwhile, the Northern Secretary Julian Smith moved to reject speculation that he could follow the example of former British work and pensions secretary Amber Rudd by also resigning from the British cabinet.

In a tweet on Monday he said that “media speculation about me doing anything other than continuing to represent & work flat out for Northern Ireland is v wide of mark”.

Mr Eastwood said “the only mechanism that can reflect both traditions on this island in the spirit of the Good Friday agreement is a form of joint authority or administration with a structured role for Dublin”.

“We will not allow hard Brexiteers to snatch powers from the North and exercise them to deliver a Brexit that is opposed by people here,” he said.

Mr Eastwood added, “The one guaranteed way to defeat direct rule is for local parties to reach a resolution with each other. We have undertaken significant work with the Ulster Unionists and the Alliance Party but we can’t do it alone.

“The DUP and Sinn Féin need to reconcile their challenges and play their part in the restoration of the institutions. We have it in our power to take back control and defend the interests of the people we represent.”

The Alliance leader Naomi Long said the prorogation or suspension of the British parliament removed what little scrutiny there was on Northern Ireland.

“It speaks volumes that on the same day that Boris Johnson refuses to answer questions from UK journalists in Dublin, he is shutting down parliament and avoiding questions there too,” she said.

“With no Assembly there is already a democratic deficit and this simply adds to that, at a time when Northern Ireland businesses, trade unions and the general public desperately need answers,” added Ms Long.

Sinn Féin MP Chris Hazzard said Ms Foster and the DUP were ignoring the views of the people of the north on Brexit and the Irish backstop. “Once again Arlene Foster and the DUP have set themselves against the majority in the north who are opposed to a no deal Brexit,” he said.

“ Westminster is the source of the problems of Brexit; it will not provide the solutions. The shelving of the British parliament will only add to the crisis caused by Brexit,” he added.

“That is why more and more people are now looking to a new future and considering their place in a new, united Ireland,” added Mr Hazzard.

The Ulster Unionist Party leader, Robin Swann said he hoped Mr Johnson and Mr Varadkar were “engaged positively and meaningfully in finding a solution to ensure that the United Kingdom leaves the EU in an orderly manner with an agreement”.

“However, let’s be absolutely clear that the backstop cannot be the basis for agreement,” said Mr Swann.

He added, “The fact is Northern Ireland unionists of all shades are potentially being hung out to dry by a UK Government that has taken its eye off the ball and an Irish Government that has wrapped itself in the flag regardless of the risks posed to our economy and their own.”