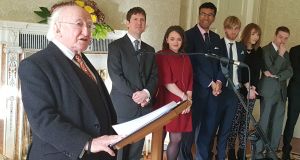 President Michael D Higgins has called on senior officials in the public service to uphold legislation guaranteeing the right of Irish speakers to interact with the State in their own language.

President Higgins made his comments during an address at Áras an Uachtaráin on Friday honouring the volunteer efforts of seven individuals who have built the Irish language edition of popular language learning app Duolingo (www.duolingo.com).

Mr Higgins, who earlier this year stated his concern at the lack of visibility of Irish in usage at the highest levels of the public service, said the push for Irish language rights remains an “unfinished project”.

“Those of us who have been interested [in the Irish language] . . . have simply been asking for a basic right. That is, the right of people who wish to speak Irish, to do their business with the Irish State [in Irish] . This is an unfinished project,” Mr Higgins said.

Referring to the Official Languages Act 2003 which sets out the duties of public bodies regarding the provision of services in Irish and the rights of the public to avail of those services, Mr Higgins said the legislation should be put into practice.

This, he said, must be done “particularly by those who are in senior positions within the Irish public service” and they in turn “must be given leadership” by those who believe in honouring the rights of Irish speakers.

“The first President of Ireland spoke seven languages. He didn’t find that speaking Irish interfered with his ability to speak German to his wife, to speak Hebrew, to be familiar with Latin and Greek texts [or] to speak French.

“The notion that participation in the modern world – being a brilliant scientist or technologist or travelling in any part of the world – [and] that you are enormously enhanced by being a monoglot is far closer to one of the grosser assumptions of imperialist superiority than it is to anything democratic,” Mr Higgins said.

Commending their efforts, Mr Higgins said their contribution was “an act of both national and global citizenship”.

Thanking them for “putting their skills at the service of the Irish language,” Mr Higgins said they had proven “in one significant gesture” that “it is possible, for a vast number of people to become quickly competent in all of the basic words in Irish and grammar and syntax . . . that can be used in any part of the planet”.

“I see this as something very, very significant,” he added.

Commenting on the international nature of the Duolingo audience, Mr Higgins said it was “fascinating that three quarters of the Duolingo Irish students are from outside of Ireland”.

“This fact alone will be of interest to the State’s language strategists and to bodies such as Conradh na Gaeilge in terms of how to tap into this interest among both the Irish diaspora and those with Irish heritage with an interest in engaging with the language.”

“It is the language of one of the great migratory movements of the 19th century and that is why it is so significant that it’s being accessed through this new means in the United States, ” Mr Higgins said.

President Higgins said he was looking forward to the publication of the Government’s forthcoming digital plan for the Irish language and added that he hoped they “take account” of the success of the Duolingo project as “an example of what can be achieved quickly”.

Duolingo’s Karin Tsai said the success of the app showed the widespread interest in the language internationally.

“We were extremely excited and happy not only for our Irish contributors but for the entire Irish community. It is fantastic to see that not only interest for it but that we can help in the revival of the language and expose it to more and more people. Certainly we have shown here that there is a large interest globally in the language.”

Duolingo, a Pittsburgh-based company, launched its Irish learning course in late August 2014 with just 6,000 signed-up users. In just over two years, more than 2.3 million people have downloaded and used the Duolingo app to learn Irish and it is now ranked as the ninth most popular language offered by the company.

Karin Tsai said the success of the app was in part due to the science-based and interactive nature of the software.

“Duolingo is currently the most popular way to learn a language online. We have over 150 million registered users now.What sets is apart from other language learning platforms is that we found a way to make learning a language fun for people. It is interactive and it is also science-based in that we use a lot of data to personalise the learning experience for users.”