Campaigners concerned about arrival of ‘Islamophobic’ group in State 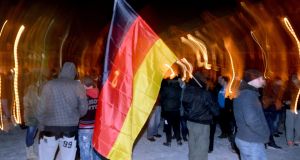 Pegida demonstrators walk with a German flag during a demonstration in Potsdam last month. Anti-racism campaigners and migrant support groups are to hold a rally in Dublin on Saturday to protest against the establishment of an Irish branch of the anti-Islamic group Pegida. Photograph: Ralf Hirschberger/EPA.

Anti-racism campaigners and migrant support groups are to hold a rally in Dublin on Saturday to protest against the establishment of an Irish branch of European anti-Islamic group Pegida.

Ronit Lentin, of Anti-Racism Network Ireland, said that the establishment of an Irish branch of Pegida (Patriotic Europeans Against the Islamicisation of the Occident), which holds its inaugural Irish rally in Dublin on Saturday, was an extremely worrying development given the group’s record since it was founded in Dresden in Germany in 2014.

She said Pegida had shown itself to be “racist and Islamophobic” and was concerned about the potential rise of such “an extreme a right wing organisation” in Ireland.

Ms Lentin said the response from anti-racism groups and those working with migrants to the protest against Pegida had been very positive. She urged as many people as possible to attend the anti-racism rally at the GPO on O’Connell Street at 1.30pm on Saturday.

“Pegida have shown themselves to be extremely dangerous in other European jurisdictions and we see this as a move to introduce a racist right wing party to Ireland and we want to make sure that migrants and people of Muslim origin know they are welcome and are entitled to call Ireland home,” she added.

Ms Lentin said that while Pegida claimed to be simply anti-Islamic, it could easily broaden into an anti-migrant movement in Ireland where any newcomers and foreigners would be targeted.

“It may become an anti-immigrant movement generally because the Islamification of Europe is a figment of the imagination of the racist. Muslims are still a minority in European countries and yet are the most obvious form of targets of racism in recent years, in particular since 9/11.”

Among those attending the anti-Pegida rally is Cork South Central People Before Profit candidate, Jim O’Connell who mounted a protest in Blarney last Friday when Identity Ireland held a press conference to announce details of Pegida Ireland’s launch in Dublin on Saturday.

The press conference was addressed by Identity Ireland chairman Peter O’Loughlin, who spoke at a Pegida rally in Dresden last month, and Pegida UK co-ordinator Tommy Robinson, who founded the English Defence League (EDL) but has since left.

Mr O’Connell said it was important that “Pegida is stamped out here in Ireland” as their philosophy was “anti-Muslim and anti-immigrant” and they were attempting to portray Ireland as being under some threat from an influx of Muslims which was not the case.