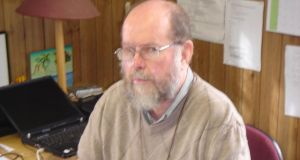 An Anglican priest who lost both his hands and his right eye over his opposition to apartheid in South Africa has offered his support to the community affected by the Corrib gas project in north Co Mayo.

Fr Michael Lapsley, who suffered his injuries in a parcel bomb attack in 1990, addressed the community at a public talk and workshop hosted by social justice organisation Afri in Erris over the weekend.

“When injustice occurs, the moral order is inverted and people often have to wait a long time before they can be allowed to heal,” Fr Lapsley said. “A recognition that people were struggling for justice begins to restore that moral order.”

The New Zealand-born priest, expelled from South Africa in 1976 over his opposition to apartheid, became a chaplain to the African National Congress in exile in Lesotho. He was then forced to move to Zimbabwe, where he was seriously injured in the parcel bomb attack three months after Nelson Mandela was released from jail.

The attack was linked to South African security forces, but two years later he returned to South Africa to set up the Institute for Healing of Memories – realising that the truth and reconciliation commission would allow for only a minority of South Africans to have their testimonies heard.

A strong believer in restorative rather than retributive justice, he has worked in situations of conflict all over the world, including in Northern Ireland.

Fr Lapsley said people who had endured injustice often blamed themselves or became “victimisers of others”.

“I am not saying that this has happened in here in north Mayo, and there are often areas of silence where people are told they must forget and move on,” he said. “Yet everyone has a right to have their story heard in a safe space and one that allows them to leave some of the poisonous aspects of their experiences behind them.

“This is not about saying that people should stop struggling for justice, but one needs to be healthy enough to continue with this struggle . . . Healing is about healthy selfishness.”

Fr Lapsley said that he had “no magic pill, and no quick fix” to offer a community that had been split, as the Kilcommon parish had been, over the gas project, and which had felt betrayed by the State. He said: “We can only guarantee people that we will bring them one step on the road to healing.”

Joe Murray of Afri, who travelled with Fr Lapsley to Mayo, said his group was aware of the level of trauma experienced in the community. The community had been invited to select its participants for the workshop with Fr Lapsley, and Afri was aware “it might not be for everybody”.

Fr Lapsley said Archbishop Desmond Tutu had often spoken about living in a “moral universe” and this was something that a multinational such as Shell, lead developer of the Corrib project, must remember.

“It is just as important for people in positions of power to have a sense of morality and compassion, and even acknowledging that people got hurt is important,” he said.

“This does not take away from the wrong that has been done, and that should not continue to be done.”