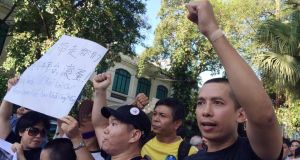 China has sent four more oil rigs into a disputed area of the South China Sea less than two months after it placed a giant drilling platform in waters claimed by Vietnam, ratcheting up regional tensions.

The largely unpopulated Paracel islands are administered by China but claimed by Vietnam, and they have become the flashpoint in an increasingly aggressive territorial row between the two neighbours, ideological allies as fellow communists but with stark divisions.

A Chinese foreign ministry spokeswoman said the rigs were in waters close to Guangdong province and Hainan island. “There is no need to over interpret the recent deployment of four oil rigs in the South China Sea,” Hua Chunying told a daily news briefing.

China claims 90 per cent of the 3.5-million-square-kilometre South China Sea. The Philippines, Malaysia and Brunei claim some of the Spratlys, while China, Taiwan and Vietnam claim the whole chain.

The dispute is the most serious threat to relations between the communist rivals since a brief war in 1979 following Vietnam’s invasion of Cambodia. They are rapidly becoming the South China Sea equivalent of the equally uninhabited islands in the East China Sea, known as the Senkaku islands in Japan and the Diaoyu islands to the Chinese.

Meanwhile, China is dealing with tensions within its own jurisdiction after Hong Kong democracy activists kicked off an unofficial referendum on universal suffrage in Hong Kong, a move that is sure to anger the Communist leadership in Beijing. The poll is being organised by the Occupy Central protest movement, and organisers hope it will draw up to 300,000 people to strengthen the legitimacy of the group’s demands for a fair and representative election in 2017 that would include opposition democrats.

The online vote began yesterday, but it has been extended by a week after cyber attacks.

When Britain gave Hong Kong back to China in 1997, the terms included a “two systems-one country” package and a mini-constitution known as the “Basic Law”. This enshrines democratic rights, which irks many in the communist leadership, as reflected within the White Paper published this month.

Voting on a broad level in Hong Kong would be the first example of democracy in mainland China, and is obviously a threat to single-party rule by the Communist Party, which has run China since the 1949 revolution.