An Taisce objects to Star Wars filming on Skellig Michael 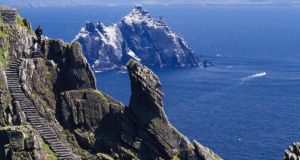 An Taisce has asked Minister for Arts Heather Humphreys to outline how she is giving consent to the Disney Lucasfilm Star Wars project on the Unesco world heritage site at Skellig Michael off the Kerry coast.

An Taisce heritage officer Ian Lumley points out that the return of Disney Lucasfilm to the island in September will have implications under the EU Birds and Habitats directives, as there will still be “considerable numbers” of two priority-listed bird species - Manx Shearwaters storm petrels - on the island.

In his letter to the Minister, he said that one of the “greatest threats” from the filming involves “the risk of accidentally bringing rats to the island with all the cargoes, including extensive food and catering”.

He said the absence of rats on Skellig Michael allows bird populations to thrive.

One of the most important protection measures agreed during initial filming last year was the inspection of every load transported out from a temporary base on farmland near Portmagee harbour.

“If weather conditions are adverse, this will be much harder to do and enforce,” Mr Lumley said.

He has asked Ms Humphreys to outline the proposed management and mitigation of a range of “potential adverse impacts” on the ecology and archaeology of Skellig Michael.

Mr Lumley said An Taisce’s concern was prompted by the fact that last year’s filming for Star Wars: Episode VII – The Force Awakens was facilitated “in breach of long-established conservation policy for the world heritage site”.

“We note at least a week’s filming activity, involving closure of the island for most or all of that period has been requested, as well as preparation and clean-up times,”he said.

“This clearly involves a larger scale project than last year, and of possible longer duration, increasing all the inappropriate impacts and the overall gross threat involved.”

Mr Lumley stressed the fragile nature of the 6th century archaeological site, and said at present there are Manx Shearwater chicks at various stages of development on the floors in the corners of fours of the monastic buildings.

“At least some will still be present, or at the point of fledging during the proposed time for filming and filming preparation,” he said.

He said other vulnerable birds, including fulmars, may still be present in large numbers in mid-September.

Skellig Michael boatmen have been booked for the filming from September 14th on the basis that this would be outside the main seabird breeding season.

The island has the “highest level” of protection under the Birds and Habitats directives, Mr Lumley said. Any breach of this could expose the State to legal action by the European Commission.

“The Star Wars film project has no relevance to the monument’s historical, cultural and spiritual value,” Mr Lumley said.

He said Skellig Michael cannot be regarded as a limitless economic resource.

“It is not sufficiently understood, even among those who depend on tourism locally, that in order to protect Skellig for the future, it can never be regarded as a mass destination,”he said.

“Existing limitations on visitor numbers, activities, the places of access on the island , and the hours of access to the island are minimally necessary, and this was policy upheld and fully understood in management until the 2014 filming.”

Office of Public Works staff on the island are understood to be extremely concerned at the handling of the project, but have been asked to sign confidentiality agreements.

“The real fragility of the island and the historical remains does not seem to be properly understood and appears to be getting sidestepped by all that is now happening, which adds up to a substantial long- term threat,”said a source close to staff.

Ms Humphreys’s department confirmed it had received An Taisce’s correspondence and a reply would issue in due course.

It said that Skellig Michael is a “world heritage site, a Special Protection Area (SPA) and a nature reserve,” and all relevant protections apply to the site.

“All queries relating to film projects should be directed to the Irish Film Board,” it said.

The Irish Film Board did not respond to queries from The Irish Times.