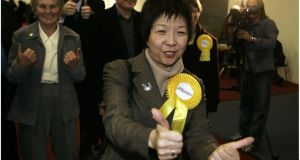 Unionist parties moved quickly today to exploit what they viewed as a pre-election gaffe by Anna Lo, an Alliance South Belfast Assembly member and the party’s candidate in the May European elections in Northern Ireland.

Ms Lo was upbraided by the DUP, the Ulster Unionists, the Traditional Unionist Voice party and the Northern Ireland Conservatives after she said she supported a united Ireland created by consent and further implied that Northern Ireland was a colony.

Ahead of Saturday’s annual Alliance conference and also ahead of local and European elections in two months time she told today’s Irish News that a united Ireland would be “better placed economically, socially and politically”.

She said it was “very artificial” for Ireland to be divided up and for “the corner of Ireland to be part of the United Kingdom”. She added that she was “anti colonial” while insisting unity could only be achieved through the consent of the people of Northern Ireland.

While Ms Lo is viewed as a straight-talking politician her comments did cause surprise and unease among several Alliance members. The party adopts a so-called “agnostic” position on the union with Britain, although the majority of its support is viewed as coming from centrist unionists.

Some of that vote has been threatened because of the decision by Alliance, which had the casting vote, to bring in a policy at Belfast City Council whereby the British union flag would only fly over City Hall on some 17 designated days rather than all year round as heretofore. This was the issue that triggered the flags controversy and disturbances and in a more long-term sense raised questions over whether the party could hold the East Belfast Westminster seat that Naomi Long won from DUP First Minister Peter Robinson in 2010.

While the official line from Alliance was that the party drew its support from a diverse range of constitutional opinion several members including former Assembly member Seamus Close viewed her remarks at the “politest” as “naive”, particularly ahead of Saturday’s annual conference and the May elections.

Unionist parties formed a line to condemn her remarks. DUP enterprise Minister Arlene Foster said Northern Ireland was neither a colony nor a mere “corner of Ireland” and that Ms Lo should apologise for her remarks.

“It is not entirely surprising to hear such clear Irish nationalist aspirations coming from within the Alliance party. Many people have commented for some time about a gradual drift within that party and the attitude amongst many members moving from being agnostic on the union to antagonistic,” she added.

Ulster Unionist MEP and European candidate Jim Nicholson said Ms Lo’s comments seemed “to be yet another attempt by the Alliance Party to distance Northern Ireland from the United Kingdom”.

TUV leader Jim Allister said her comments shattered “the myth that Alliance was “agnostic” on the union. “The removal of the union flag from Belfast City Hall showed something of Alliance’s true colours. Now Anna Lo has backed Irish unity - revealing that the tricolour are more her colours,” he added.

The NI Conservatives European candidate Mark Brotherston said her remarks were “misguided and ignorant”. He said the most worrying aspect of her comments was that “Ms Lo seems to be under the impression that Northern Ireland is a colony”.