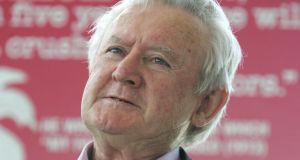 Actor and comedian Niall Tóibín is to be honoured with the Freedom of Cork this year. File photograph: Frank Miller/The Irish Times

Veteran actor and comedian Niall Tóibín is to be honoured with the Freedom of Cork later this year, after city councillors voted overwhelmingly to bestow the honour on him.

Mr Tóibín (85) grew up at Bishop’s Field on Cork’s northside, where he attended North Monastery. He left Cork in 1947 but has always remained fiercely proud of his roots.

Although a date has yet to be finalised for the ceremony, a Cork City Council spokesman said that Mr Tóibín is most likely to be honoured by the council sometime in May.

The decision by Cork City Council to honour the award-winning actor comes on foot of a proposal by the Lord Mayor of Cork, Cllr Mary Shields of Fianna Fáil.

“I am proposing to grant the freedom of the city to Niall Tóibín . . . I believe it is timely we should honour one of our own local and national greats, one of the finest actors of our time.”

Following a debate, councillors voted by 23 to 3 to honour Mr Tóibín.

Mr Tóibín began his acting career when he joined a drama society attached to the Keating branch of the Gaelic League in Cork, before moving to Dublin to join the civil service.

In 1953 he quit his job in the civil service and joined the Radio Éireann Players repertory company and later held tenure at the Abbey Theatre.

He went on to enjoy a highly successful career in film and television, including appearing in films such as Ryan’s Daughter, Eat the Peach, Far and Away and Veronica Guerin.

He also appeared in TV series such as Bracken, The Irish RM and Ballykissangel, as well as in the mini-series Caught in a Free State, about German spies in Ireland during the second World War.

On stage, he won a Tony Award in Broadway for his performance in Brendan Behan’s Borstal Boy in the 1970s. He has also toured his show about Behan, Behan Himself.

Mr Tóibín will join a distinguished list of recipients of the Freedom of Cork, which includes US presidents Woodrow Wilson and John F Kennedy, as well as Irish presidents Éamon de Valera, Mary Robinson and Mary McAleese.