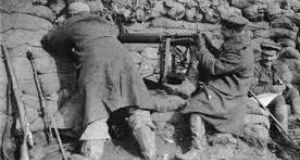 Arrangements were made to ensure shamrock was sent to every Irishman in the service of the British armed forces during the war.

Irish Parliamentary Party leader John Redmond arranged the consignment for all the Irish battalions and the Irishmen serving in the royal navy.

The Irish Times reported: “It is stated that the Admiralty and the War Office have been making special arrangements to ensure the safe delivery of the parcels. The arrangements have meant a great deal of trouble, but the result will be well worthwhile for it is while on active service that both the soldier and the sailor most appreciate everything from home.”

An exhibition of war memorabilia in Dublin has attracted “great interest”, The Irish Times reported.

The exhibition was held in the Engineers’ Hall in Dawson Street. The primary exhibit was the hour-hand from the clock on the front of the famous Cloth Hall at Ypres. The Cloth Hall, a medieval masterpiece, was reduced to rubble by German shells during the war.

Also displayed was a Red Cross flag from the German hospital at Duala, various German helmets, Bulgarian bayonets and a periscope taken from a German U-boat.

The crime rate at home dropped dramatically. The cases coming before the Spring Assizes were small in number and “trifling” in character, The Irish Times reported.

The Commissioners of Prisons issued a frank analysis of the phenomenon. It concluded that the drop was as a result of “the drafting into the Army of a considerable part of the section of the population from which the criminal classes ordinarily come”.

A German sign informing Irishmen of the Easter Rising has gone on display in the National Museum Collins Barracks.

The small wooden placard was placed in front of the trenches belonging to the 8th Royal Munster Fusiliers on May 1st, 1916, two days after the Rising ended. The sign was shot up by the Munsters and then captured.

It states: “Irishmen! Heavy Uproar in Dublin! English guns are firing at your wifes (sic) and children.” It is on loan from the Imperial War Museum in London.

The English department in Coláiste Chiaráin in Limerick is planning a re-enactment of the Rising on March 16th in Croom.

Some 101 students will march with teachers through the town. The battle will commence on the streets of Croom.

Social Democrats to ‘radically scale up’ number of new homes 17:59
Over 65s are expected to ‘crawl into corner and die’, says election hopeful Valerie Cox 17:56
Seven arrested in PSNI crackdown on money laundering crime gang 17:40
Man shot at in taxi claims bail conditions made him ‘sitting duck’ 17:28
Gay man awarded €27,000 for harassment over his sexual orientation 17:03