'I, as Taoiseach, on behalf of the State, the Government and our citizens, deeply regret and apologise unreservedly to all those women for the hurt that was done to them' 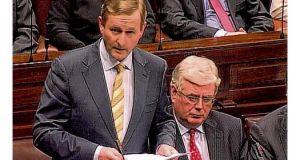 Enda Kenny delivering an apology to the Magdalene women on behalf of the State in the Dáil yesterday.

It was dark when the Magdalene women left Leinster House. They joined hands and formed a line across the width of the granite plinth.

“Come into the light!” shouted the photographers.

And these elderly women began to walk, and as they walked towards that light they quickened their pace and some began to cheer. All smiling – but through tears, for some.

This was the night the women of the Magdalene laundries thought they would never see, and a night that those who were present in the Dáil chamber will never forget.

It was an evening when our Taoiseach and national parliament did the right and decent thing by the wronged Magdalene women.

It was a powerful, compelling speech from the Taoiseach. It was riveting. And with it, he answered those people who questioned his sincerity and motives after that first, wishy-washy response to the McAleese report.

But it wasn’t Enda Kenny who stole the show, rather it was the response of the women in the wake of his address.

Who would blame them if they were to show a hint of bitterness or anger? Of if they had shrugged their shoulders at a gesture which has come years too late? Yet they didn’t.

They wanted that apology and that vindication and validation. When it came, they were the epitome of grace and dignity. “I thought it was wonderful. God bless him. Now I’m a proud woman today. God bless the Taoiseach,” said Marina Gambold, echoing the gratitude expressed by her companions-in-arms for what Enda Kenny had done for them.

They arrived at Leinster House in the late afternoon, wondering what would happen.

A few arrived early. A handful of grey-haired women with careworn faces, they settled in the gallery to watch Leaders’ Questions. On both sides of them sat groups of secondary schoolgirls, spruce in their uniforms, with their laughing faces and lovely teeth.

We wondered if they felt sad, looking at the girls, for the youthful fun they never had. But, as their reaction to the speech would later show, the Magdalene women aren’t like that.

Seats were reserved in the gallery for the women. Soon, it was standing room only. Alan Shatter called up to talk to them before the debate began. A babble of female voices filled the Dáil. Then, on the stroke of half past six, the Taoiseach led in his Cabinet. He took his seat in total silence.

Joan Burton waved up to some of the women. Clare Daly, opposite, did the same.

Enda stood. He thanked Martin McAleese for his report and all those who assisted in its compilation. Then he quickly got down to business.

“The Government was adamant that these ageing and elderly women would get the compassion and the recognition for which they have fought for so long, deserved so deeply, and had, until now, been so abjectly denied. The reality is that for 90 years, Ireland subjected these women and their experience to a profound and studied indifference.”

In the gallery, some of the women held hands. Some were crying. You could almost see the weight lifting from their shoulders. It was so quiet, we could hear the clock ticking.

He spoke of the Magdalene women having to bury and carry in their hearts the dark secrets of “a cruel, pitiless Ireland” for all their lives. Innocents forced to carry an unjust stigma foisted on them by a pious and prim society.

The Taoiseach’s voice was steady and clear: “From this moment on, you need carry it no more. Because today . . . we take it back.” There were gasps in the gallery. Deputies blinked and welled up. Outside the round railing, Senator Marie Maloney wept. Clare Daly wrapped her arms tightly across her chest, her eyes brimming. Billy Kelleher fought back the tears.

In the public gallery, they didn’t hold back. The Taoiseach listed some of the things that happened to these dignified older women when they were young girls – some told to him by them when they met last week.

It was a long, heart-wrenching list. Things like “I felt all alone, nobody wanted me . . . We had to sew at night, even when we were sick . . . I heard a radio sometimes in the distance . . . I broke a cup once and had to wear it hanging around my neck for three days. I felt always tired, always wet, always humiliated . . . I never saw my mam again – she died while I was in there . . .” Tissues were passed around. Noses blown, spectacles pushed up and eyes rubbed.

Fifteen minutes into the speech came the apology. The air crackled with emotion.

“I, as Taoiseach, on behalf of the State, the Government and our citizens, deeply regret and apologise unreservedly to all those women for the hurt that was done to them, and for any stigma they suffered, as a result of the time they spent in a Magdalene Laundry.”

Enda hadn’t let them down.

Hands were clapped across open mouths. Hankies appeared again. There were hugs and smiles, lots of smiles.

Arrangements would be put in place for compensation and a permanent memorial will be erected. Finally, the Taoiseach remembered one of his meetings with the Magdalenes. One woman sang him a song at the end of it – Whispering Hope – and quoted a line which stayed with him. “When the dark midnight is over, watch for the breaking of day.” Enda paused. “Let me hope that this day and this debate . . .” and he stopped, fighting back the tears. “Excuse me” he murmured. He took a gulp of air and went on “ . . . heralds . . .” and he cleared his throat and paused again “a new dawn for all those who feared that the dark midnight might never end.” And it was over. Enda sat down, pale and drawn.

The women started to applaud. Louder and louder, some with their hands in the air. They stood and clapped the Taoiseach and they embraced and then they applauded themselves. It was such a happy, heartbreaking scene. And then the deputies began to applaud, rising too to their feet.

Even the Ceann Comhairle knew there are times when rules just have to be broken. He stood and applauded too. Ushers were in tears. Civil servants in tears. Journalists in tears.

Later the Taoiseach went into the gallery to met the women before they left, tired but walking taller, happy. A huge burden lifted.

He made it a special night to remember for his, and our, special guests.

1:24 Roger Stone thanks Donald Trump for 'saving his life'