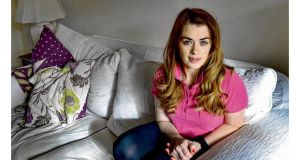 Yvonne Brennan, who suffers from severe epilepsy, at her home in Rathfarnham, Dublin. photograph: brenda fitzsimons 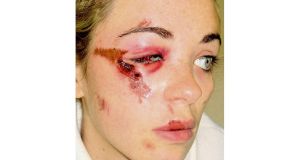 The effects of a fall during one of Yvonne Brennan's seizures. photograph: brenda fitzsimons

Yvonne Brennan’s seizures come without warning, last just minutes, and have life-long consequences. Two years ago, she collapsed in a car park, shattering her front teeth. Disaster was narrowly averted on another occasion when she fell to the ground in front of onrushing traffic.

For Yvonne and a minority of other people with epilepsy, intensive brain monitoring followed by surgery may be the only feasible way of managing the severity of their condition. The monitoring is not available in Ireland, yet the HSE has twice refused her application to go to the UK under the treatment abroad scheme. It allows patients to be referred to other EU states for treatment that is not available here.

The first time she was refused, it was claimed the treatment she sought was available in Ireland. This is clearly not the case, a fact confirmed by her specialist Dr Colin Doherty, consultant neurologist at St James’s Hospital and the HSE clinical lead in epilepsy.

She says the second time she was told to apply to her private health insurer for the cost of the treatment, even though funding is not a criterion in the scheme. This would cover less than €2,000 of a treatment costing over €50,000.

Forced to stay at home because of the life-threatening consequences of another violent seizure, the 27-year-old part-time hairdresser from Rathfarnham is now penning a third application to the HSE for the treatment she desperately requires.

“I have lost all my front teeth, I’ve had to have plastic surgery twice and I still have major scarring that cannot be fixed. I’ve had seizures almost everywhere possible. I cannot go out alone as I’ve had near misses with traffic. I cannot do the simple things like having a bath, locking the toilet door or driving.”

Yvonne has suffered seizures since she was 15, but of late they have become more violent and the drugs prescribed for her are having little effect. Because she suffers from frontal lobe epilepsy, where the disturbed activity is in the centre of the brain, her condition is very difficult to control.

Dr Doherty says epilepsy is difficult to control in about 15 per cent of cases, and that for 5 per cent surgery may be a viable option. The first stage in treatment is 24/7 monitoring of brain patterns via electrodes attached to the head, which can pinpoint the origin of seizures when they occur.

New units for performing this monitoring are ready in Beaumont Hospital and Cork University Hospital but have been lying idle for want of staff.

But even if the units were open they wouldn’t be of use to Yvonne. The lesions causing her epilepsy are not immediately obvious, so surgeons would be reluctant to operate without having the fullest information available.

Dr Doherty says this is a complex case which requires the kind of expertise only available in Queen’s Square hospital in London, which specialises in high-level neurosurgery.

Yvonne considers herself “blessed” with a supportive family but, she says, “It is hugely frustrating and degrading that I have to beg to be allowed to have tests that I need done”.

While it didn’t comment on her case, the HSE said that 91 per cent of applications under the treatment abroad scheme were approved last year.

In limbo: facilities in Ireland

Two state-of-the-art units for monitoring patients with severe epilepsy in Beaumont Hospital and Cork University Hospital have been mothballed since last November, while 280 people with the condition languish on waiting lists for treatment.

The units were upgraded, at a cost of €900,000, as part of a new clinical care programme for epilepsy designed to improve treatment for the 15 per cent of patients who require monitoring 24/7.

The units provide four beds in Beaumont and two in Cork to replace the two beds which were previously available in both centres. The aim, according to HSE clinical lead in epilepsy Dr Colin Doherty, is to carry out 300-400 operations a year, compared to a total of 400 operations carried out on epilepsy patients since the first surgery in the 1980s.

Over 130 people die from epilepsy each year, and many of those on the waiting list are at significant risk of death or serious injury as a result of seizures.

The delay in opening the units arises from delays in sanctioning specialist staff to operate them. Five nurses are needed to staff the Beaumont unit in place of the previous one.

To make matters worse, the Cork unit has been referring patients to Dublin in the mistaken belief that it was in operation.

The HSE said two nurses are due to start at Beaumont in the coming weeks while the hospital was seeking to recruit the remainder as a priority. The unit would be open on a phased basis as staff were recruited.

It said the Cork unit would open this year.