Those infected had a history of travel outside of the North, says Public Health Agency 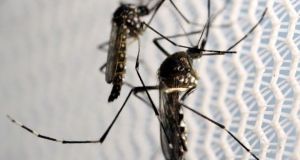 A number of Zika virus cases have been confirmed in Northern Ireland since the World Health Organisation declared an outbreak in 2015.

However, she could not confirm a BBC report on Wednesday which suggested a person was diagnosed with Zika in the past week.

When asked if a person has been treated recently and if it was linked to travelling to the Olympic Games in Brazil, the spokeswoman said she could not provide a response as the organisation “does not talk about individual cases”.

A statement from the PHA said: “Zika does not occur naturally in the UK. “However, since 2015, the Public Health Agency (PHA) can confirm that there have been less than five cases of Northern Ireland residents diagnosed with Zika virus.

“All have a history of travel to Zika-affected areas.”

There have been 117 confirmed cases of the Zika virus in the UK since the outbreak last year.

According to the UK’s National Health Service, most cases of Zika virus disease are spread by infected mosquitoes biting humans.

There have been a small number of reports of Zika virus being passed on through sexual intercourse, although the risk is thought to be low.

Rory McIlroy, who is from Co Down, was among a number of golfers who decided not to take part in the Rio Olympics over the summer because of the risk posed by Zika.

The connection between Zika and microcephaly first came to light last year in Brazil, which has since confirmed more than 1,800 cases of microcephaly.

In adults, Zika infections have also been linked to a rare neurological syndrome known as Guillain-Barre, as well as other neurological disorders.

There is no vaccine or treatment for Zika, which is a close cousin of dengue and chikungunya and causes mild fever, rash and red eyes.

In Brazil thousands of babies have been born with suspected microcephaly or abnormally small heads since the outbreak was declared.

An estimated 80 per cent of people infected have no symptoms, making it difficult for pregnant women to know whether they have been infected.