Why Ebola is winning

Halting the spread of the disease means fighting it in Africa. But, in one of the poorest parts of the world, finding 9,000 people to take on hazardous, harrowing and complex medical work is just one of several big challenges 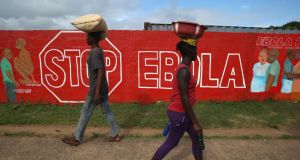 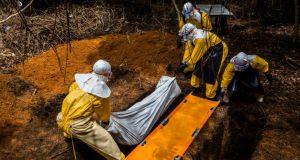 Grave: a body is buried next to an Ebola treatment unit in Liberia. Photograph: Daniel Berehulak/New York Times 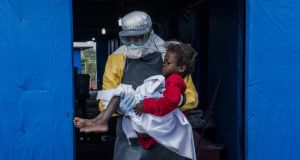 Finger-pointing, conspiracy theories, barely repressed panic and many more dead bodies: the battle against Ebola isn’t going well. As Ireland starts to worry about the possible arrival of cases, some of our European neighbours with more direct links to west Africa have responded more aggressively, with screening checks at major airports.

The virus continues to live down to its deadly reputation, spreading with renewed vigour in Sierra Leone, Liberia and Guinea and somehow jumping from human to human in two sophisticated western healthcare settings on two continents. Almost 10,000 cases so far, and 10,000 a week predicted within two months.

So why, in the words this week of Anthony Banbury, head of the United Nations’ Ebola mission, is the virus “winning the race”? And what can we do now to catch up?

“People are not dying of some dirty little virus. People are dying of poverty,” Bob Geldof, in a characteristically sweeping take on the crisis, said this week. It’s a point that has been made repeatedly over the past seven months: Ebola is thriving in three collapsed west African states that lack the resources to mobilise effectively against the disease.

Which doesn’t get us very far. The richer countries have lessons to learn from this crisis – about not tolerating persistent poverty in an ever-shrinking world, for example – but the first challenge is to get the epidemic under control.

For Dr Gabriel Fitzpatrick, chairman of Médecins Sans Frontières – aka Doctors Without Borders – in Ireland, there is a simple reason why efforts are failing to keep the disease in check. “Throughout the three countries in west Africa, infected patients are not being isolated and are therefore spreading the disease,” he says.

According to the World Health Organisation, just 21 per cent of the required beds are available in Liberia; in Sierra Leone the figure is 29 per cent and in Guinea 50 per cent. The UN says that “finding donors to fund the construction of new treatment facilities, and foreign medical teams to staff them, remains an ongoing priority” .

Why the desperately needed isolation of infected people is not happening as much as it should is more complicated. The region has about 1,000 Ebola beds but needs 4,000. “Beds” in this context means the physical bed and the staff servicing it.

Patients are typically treated in case-management centres, each one with about 100 beds and designated low- and high-risk areas. About three staff are needed for each bed; not just doctors and nurses but also sanitation and logistics experts and health-promotion staff. That suggests a need for at least 9,000 extra staff.

The vast majority of such staff would normally come from within a country’s resources. After all, local workers know the terrain and the culture far better than anyone else. But the affected areas are among the poorest in the world, their societies broken by long histories of civil war and deprivation. Many of those who might be expected to lead the fight against Ebola are already dead, victims of the disease.

Fitzpatrick says he doesn’t know why the world hasn’t responded with enough support to deal with the problem. “The number of beds we need, it’s not a phenomenally large number.”

The second reason why this epidemic is out of control is that it took so long to identify the cause of those early deaths. It was the day after Christmas last year when Emile, a two-year-old boy in the remote Guinean village of Meliandou, fell sick with a mystery illness characterised by fever, black stools and vomiting. Within two days he was dead. His sister died within a week, and by the second week his mother and grandmother were also dead. A family friend then transported the disease to Sierra Leone before dying.

And so it went. The contagion followed the passage of infected humans across porous borders. Nothing like this had ever been seen in this region, and cholera and malaria were initially suspected. Three months passed before samples sent to the Institut Pasteur in Paris came back positive for Ebola. By then the virus had marched into the big cities where, in the words of a World Health Organisation situation report, it “hit like sparks from a fire landing on dry grass”.

In the current epidemic an infected person goes on to infect two others. The challenge is to get at least three-quarters of infected people into isolation centres to slow the spread of the disease. The World Health Organisation, which previously advised against families caring for afflicted relatives in their homes, is softening its stance. “If we can’t do this – and we’ve showed we can’t – maybe it’s time to think of something else, like equipping communities with protective equipment and training them to use it,” says Fitzpatrick.

It seems the stuff of desperation, expecting villagers to adhere to rigorous hygiene precautions around sick neighbours when western hospitals with sophisticated gear have shown that mistakes can happen. “I don’t think isolation in the community is a great idea, but it might be better than nothing at all,” says Fitzpatrick.

This week at least brought some good news, with the announcement that Senegal and Nigeria will be declared free of the disease within days. The official end of the outbreak in Nigeria is expected to be announced on Monday, after the requisite 42-day period with no new cases has passed.

In an impressive piece of epidemiological detective work, all the confirmed cases in Nigeria were traced back to a single air traveller who introduced the virus to the country last July. Virtually everyone who had contact with the man while he was in Nigeria was traced, isolated and tested.

Speaking from Lagos, Eilish Cleary, an Irish public-health doctor, says Nigeria’s experience shows that Ebola can be contained with an organised response. “There has been so much focus on cures and serums but far less on the kind of containment you use with any communicable disease.”

Cleary is currently seconded to the World Health Organisation from her regular job as chief medical officer of the Canadian province of New Brunswick. “You need to separate the ill from the well, ensure all contacts of infected patients are tracked down and isolated and provide good care for patients,” she says.

Logistics experts can be as important as doctors and nurses in fighting the disease.

The outbreaks in Nigeria and Senegal were extremely limited compared with the carnage in Guinea, Liberia and Sierra Leone. In those countries, new cases continue to explode in areas that looked as if they were coming under control. Scientists say this cycle, of gradual dips in the number of new cases followed by sudden flare-ups, is an unusual characteristic of this epidemic. There are no signs that the outbreaks in any of the three countries are coming under control, according to the World Health Organisation.

This week it bumped up the mortality rate from 50 per cent to 70 per cent, although this was because of a reworking of existing estimates rather than any new information.

The blame game has already started. Having suffered a death toll disproportionate to their numbers, healthcare workers are now having to take a disproportionate share of the blame. Almost 500 of them have died from the virus, but this has not conferred immunity to finger-pointing.

In Madrid, Spanish health officials were quick to blame Teresa Romero, a nurse who contracted the disease after treating an infected missionary. Romero made a mistake by touching her face with the glove of her protective suit while taking it off, her boss said, adding, “If she had said it earlier, it would have saved a lot of work.”

Conspiracy theorists have been having a field day. The singer Chris Brown claimed that the epidemic was a form of “population control”; right-wing American pundits have claimed that it is variously Barack Obama’s attempt to make the US more like Africa and a payback for slavery.

As Prof John Crown, the Senator and consultant oncologist, pointed out this week, never has there been so much Ebola virus in so many bodies, so the possibility of a mutation is greater than ever. Some fear the disease may already be more dangerous than it’s currently given credit for. The World Health Organisation has stuck to its assertions that Ebola can be transmitted from person to person only through contact with infected fluids, and that it is not an airborne virus. Yet a cough from a sick patient could still infect someone close enough to be sprayed with droplets of mucus or saliva. The organisation recommends that people stand at least one metre, and preferably two, from anyone who is ill.

Gabriel Fitzpatrick says he was with hundreds of Ebola patients during his stint in a treatment centre in Sierra Leone, dressed in a scrub-top and wellingtons, and suffered no harm. Ultimately, he adds, the guaranteed way to stop Ebola in the world is to halt it in Africa. This, however, will require a bigger, faster response than anything that has been seen yet.