He has made the most saves in a World Cup match. Having Tourette’s may have helped 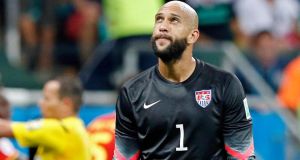 USA goalkeeper Tim Howard: The positive aspect of Tourette’s is that a lot of people with the condition have unusually swift reactions. Photograph: EPA/Guillaume Horcajuelo

By making 16 saves against Belgium, USA goalkeeper Tim Howard not only put on a bravado performance but also broke the record for the most-ever saves in a World Cup match. The US team may have lost out to Belgium in the round of 16 matches last Tuesday night, but Howard won the Man of the Match award. He also achieved something far more significant: he has become a positive role model for people with Tourette’s syndrome.

Howard, 35, who has played for Manchester United and is now with Everton, says that his Tourette’s makes him a better goalkeeper for the simple reason that people with the condition are very conscious of controlling their voluntary movements. As a neurological disorder, Tourette’s is characterised by repetitive and involuntary movements and sounds. It is because Howard has had to work hard to control his involuntary tics and twitches that his voluntary actions – as in diving for a ball or jumping to meet an incoming cross ball – are above the average athlete’s rate.

Following Howard’s performance against the Belgians, the tributes came thick and fast, with even the Belgian captain, Vincent Kompany, tweeting post-match: “Two words: Tim Howard”. President Obama even put in a congratulatory phone call to the keeper. And someone changed the Wikipedia entry for US secretary of defence from Chuck Hagel to Tim Howard. Hagel later phoned Howard to thank him for defending his country in the World Cup.

But when Howard first arrived at Manchester United he had to contend with certain sections of the UK media ignorantly labelling him as “handicapped” and “retarded” because of his Tourette’s.

The standard, music-hall joke stereotype of the condition is of a person who shouts expletives uncontrollably, but this symptom is relatively rare among those with the condition (less than 10 per cent). As Howard himself has said, “I’ve never had a curse word simply slip out.”

Howard is a typical Tourette’s person in that he has involuntary tics and twitches; in his particular case they are restricted to his arms, neck and one of his eyes. He can be seen visibly twitching when the ball is in the other half of the pitch, but as soon as the ball is anywhere near his penalty area the twitches disappear – or, as he puts it himself: “My muscles obey me then.” He puts this down to his concentration on the game being stronger than his Tourette’s at vital moments.

Current research among neuropsychologists into the condition is now focusing on how high mental concentration levels can reduce/eliminate the tics and twitches. But as Jess Thom, co-founder of the touretteshero.com website (which sets about “reclaiming the most frequently misunderstood syndrome on the planet”) told the BBC, this research should not be confused with a cure. For Thom, the most importance consequence of Howard’s World Cup display was to finally have a role model – “especially with a condition like Tourette’s that is subject to so much myth.”

The positive aspect of Tourette’s is that a lot of people with the condition have unusually swift reactions. Because they grow up being aware of and initially trying to control their tics and twitches, they have heightened motor skills. Which is why some of them excel as athletes or musicians.

Not always easy Howard alludes to the fact that it wasn’t always easy with his Man Utd and Everton teammates (the level of wit of the average Premiership footballer not being exactly of the Oscar Wilde standard) but as for his managers, Alex Ferguson, David Moyes and Roberto Martinez, he says they have never even mentioned his Tourette’s. “They don’t care about the strange movements I make from time to time; what matters to them is that I hold the ball.”

Howard’s career has been a fight against the idea that whenever he made a mistake – missed or dropped a ball – commentators would be lining up to blame his condition. In an interview last year he said he has never once dropped a ball because of a tic; when asked if he worries that it could still happen, he replied: “It won’t.”

Howard’s real victory is in displaying that Tourette’s is not a “swearing disease” and that he is not the “cursing goalkeeper”.

“With Tourette’s you live with the fact that uneducated people are in the habit of making unqualified assertions.” he said.

It’s a funny old game when it takes a World Cup round of 16 defeat to win a bigger battle. One goalkeeper, 16 saves and a new role model to drag a disorder out of the dark ages of public misunderstanding and shine a light on what people with Tourette’s are capable of doing.