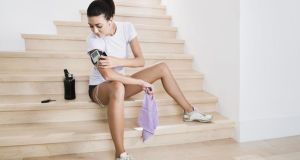 As I type this article there’s a little gadget the size of a pebble in my pocket. It’s tracking every move I make. Actually, it’s not. It probably won’t register that my fingers are whizzing around a keyboard, but when I stand up and walk over to put on the kettle, it will take note that I’m being lightly active.

Welcome to the world of wearable, sensor-based activity trackers. My one gives me updates on request during the day – how many steps I’ve taken, how many flights of stairs I’ve climbed and a number for how many calories I have burned off (more on that later). And if I want the full rundown, I can pore over my stats on an app or website.


Tracking activity to get moving
It seems intuitive that wearing an activity monitor would prompt you to make more of an effort to move around, to reach and beat targets of steps, stairs or calories. I feel it’s having that effect on me, but is there hard evidence to say such gadgets really change behaviours?

“The technology is very new, so there’s very little in the literature,” says Alan Donnelly, who is professor of exercise physiology at the University of Limerick. “But I think common sense says they probably are valuable. When you measure activity you get a much better handle on what you are doing, and that type of feedback is definitely the way of the future.”

Projects at UL are using wearable trackers to study levels of activity and sedentary behaviour in adolescent girls, as well as more specific clinical populations such as people with multiple sclerosis, back pain or rheumatoid arthritis.

“These are specific groups who can have problems getting enough physical activity,” says Donnelly. “Also people who are at risk of cardiovascular disease could be a target group that might benefit.”


Activity overestimated
One of the big advantages of wearing a tracker is that the numbers can offer a “reality check” for people about their activity levels, according to Donnelly.

“A lot of people overestimate how much physical activity they do, and very few people achieve the recommended 30 minutes per day of moderate-to-vigorous activity five or more days per week,” he says. “So I think these devices might serve as a bit of a reality check.”

That said, he notes that half the battle is getting people to the point where they will buy a tracker and clip it to themselves. “Once they are in the zone where they think they would like to monitor their physical activity, you are almost half way there in terms of improving activity levels,” he says.

But is everyone willing or able to invest in the higher-end gadgets? Couldn’t a cheap and cheerful pedometer also clock your steps each day?

“Pedometers measure distance but accelerometer-based devices also measure the rate of activity, and that is going to give you a better idea about the amount of light, moderate and vigorous activity you are doing,” says Donnelly. “But a pedometer is better than not tracking at all.”

He points out that some smartphone apps can offer a cost-effective alternative, but that you need to have the phone on your person. “If the phone is sitting on the counter, that isn’t going to be any use at all for measuring your activity,” he says.


Improving calorie count
Several wearable gadgets deliver the wearer with a calorie count, but how accurate are those numbers? There could be some improvement, according to Dr Donal O’Gorman, who directs the centre for preventive medicine at Dublin City University.

The gold standard assessments of a person’s energy expenditure involve expensive, cumbersome equipment, often tethered to a lab, and in some cases providing urine samples over the course of days – not exactly as easy as clipping a small device to your belt or wearing a wristband. So in general the calorie counts on small wearable devices are based on algorithms or equations, explains O’Gorman.

“Generally speaking, the calorie counts are based on an equation that has been previously derived either based on accelerometry, which some of these devices have, or sometimes they can be based on pedometry or step count,” he explains. “And again, generally speaking, what we found was that the commercially available sensors are about 70-80 per cent accurate for calorie count.”

O’Gorman has been working with Dr Cathal Gurrin at DCU’s school of computing on ways to improve the algorithms and provide a more accurate tally of calories burned. Their results are now hitting about 95 per cent accuracy for energy expenditure compared with the gold standard tests, says O’Gorman, and the plan is to license the technology for commercial use.

Giving people a more accurate measure of calories burned could help encourage wearers to be more active, he adds, and he believes we are only on the foothills of using wearable technology to change mindsets and behaviours about fitness.

“To me, knowing a person’s energy expenditure or calorie burn is key to that, and the only way energy expenditure will be freely available is if it is on some kind of wearable device where you can accurately measure the energy expenditure,” he says. “I think we are at the very early stages of applying technology that is going to change the way we deal with activity and inactivity as well.”

1 Ireland’s official coronavirus death toll likely to have been overstated, report finds
2 Garda who investigated child abuse sues Garda Commissioner and State
3 Dara Murphy leaves EU job after just seven months
4 Bobby Storey: The IRA's planner and enforcer who stayed in the shadows
5 The abrupt end to Brexit talks is not only surprising but perplexing
Real news has value SUBSCRIBE