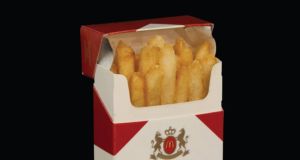 Taxes on junk food and drink, and an extra €1 on the price of a packet of cigarettes, are called for in the pre-Budget submission of the Irish Medical Organisation.

The IMO is also seeking the opening up of hundreds of extra beds in hospitals and nursing homes, as well as the abolition of the €2.50 per item prescription charge.

Other “virtuous steps” it wants achieved are more spending on mental health and addiction treatment, more management of chronic diseases by GPs rather than hospitals and an end to the “brain drain” of doctors leaving the Irish health service for better conditions overseas.

With months to go before the general election, the organisation says it will be campaigning strongly to ensure health is a key issue and for the drawing up of a five-year plan for the health service.

“While we will campaign strongly for an increased allocation of resources to the health services in the coming budget, the reality is that the key battleground for health policy is the general election and the IMO will be fighting to ensure that each election candidate and political grouping is challenged to articulate and justify their respective health policies,” said IMO president Dr Ray Walley.

He accused the Government of “policy lunacy” by adding taxes and charges to the cost of medicines that make people better while refusing to hit unhealthy drinks and food with additional taxes.

Dr Walley said this was one of seven “deadly failings” in the health service.

Others include “crises” in GP services, obesity and alcohol, a series of “own-goals” which were driving health professionals to emigrate and the loss of 1,631 beds since 2007.

Hospitals were now operating in “the death zone” with occupancy levels of 92.5 per cent, well over the point at which mortality rates rise, he said.